Some bobblehead news and notes on a quiet Monday night: 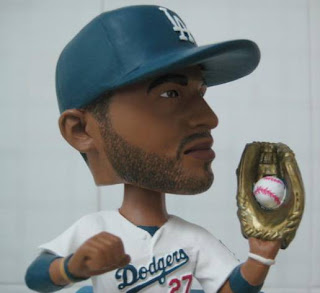 Reminder, the Dodgers will only hold TWO more Twitter Tuesday contests this season. They've been giving away Matt Kemp Gold Glove bobbleheads and Andre Ethier Silver Slugger bobbleheads all season long. Maybe they will offer those up as prizes these next two weeks. We'll have to wait and see.

Greg over at Plaschke Thy Sweater Is Argyle was one of the lucky Twitter Tuesday winners this season. You can read about his Matt Kemp Gold Glove bobblehead here.

Al Yellon, managing editor at SB Nation Chicago, shows us some of the more unusual, interesting and offbeat bobbleheads given away over the years, including a Dottie Key Rockford Peaches bobblehead, Ryan Theriot's fisherman bobblehead and my favorite, the Player To Be Named Later bobblehead.

A perfect tribute to baseball transactions everywhere, "PTBNL" has as generic a face as you could possibly imagine, although this bobblehead technically isn't a "Player TO BE Named Later; he's actually "Player WHO IS Named Later."

And in non-sports related bobblehead news, a 14 year-old Brooklyn boy has created the worlds largest bobblehead. Standing 16 feet tall, the bobblehead, which started out as a Jerry Seinfeld look-alike but has since taken a more general male form, took more than a year to build out of PVC piping, chicken wire, fabric papier-maché and springs. 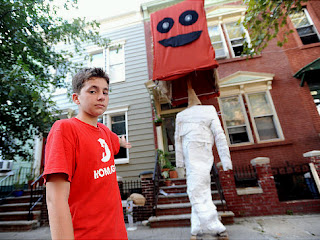 This is what happens when you're really, really bored.
Share |
Posted by Dodgerbobble at 9:16 PM