Donnie Baseball To Manage Dodgers in 2011 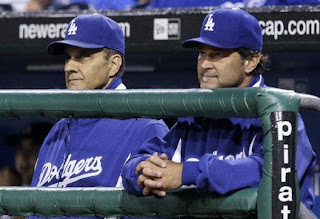 It was announced earlier today that hitting coach Don Mattingly will replace Joe Torre next season as the Dodgers manager. Mattingly has never manged at any level of the game.


The Los Angeles Dodgers announced today that former American League MVP Don Mattingly has been named the Dodger manager for the 2011 season and that Joe Torre has stepped aside from the position. Mattingly becomes the ninth manager in Los Angeles Dodger history and 27th in franchise history while Torre is expected to take time to determine his plans for 2011

"Over the past three years, I've had the opportunity to work with Don closely and have gotten to know him both personally and professionally and I'm convinced that he's the right person to lead the Dodgers," said Dodger General Manager Ned Colletti. "His work ethic is unparalleled, his baseball knowledge is vast and his leadership skills have been established during more than three decades in professional baseball.

"Donnie has also learned alongside the best in the business. Joe Torre has been a great friend, a strong leader and an incredible presence for this organization and I cannot thank him enough for his service to the Dodgers. I respect his decision to step aside and I look forward to the day where I can watch him take his rightful place in Cooperstown among baseball's legends."

"The opportunity to manage the Los Angeles Dodgers is truly an honor," said Mattingly. "There are few organizations in the world with the history, tradition and track record of success as the Dodgers. I'm looking forward to continuing what I came here to accomplish with Joe and that's to win a World Championship."


Mattingly will manage in the Arizona Fall League at the completion of the regular season. He becomes the eighth current Major League manager to pilot a big league club without previous managerial experience, joining Torre, Dusty Baker, Joe Girardi, Ozzie Guillen, Cito Gaston, Bud Black and Kirk Gibson. Lou Piniella, who began the year as the Cubs' manager, also managed in the Major Leagues without any minor league experience. Guillen won the World Series in his second year, Gaston in his third full season and Piniella and Girardi in their fourth seasons as a big league skipper. Bob Brenly won the World Series in his first year as a big league manager.

Mattingly spent 14 seasons as a first baseman for New York, where he compiled a .307 lifetime average with 222 home runs and 1,099 RBI while earning MVP honors in 1985, nine Rawlings Gold Glove Awards and six All-Star appearances.


Torre guided the Dodgers to consecutive National League Championship Series appearances and reached the postseason in a record-tying 14 consecutive seasons from 1996-2009. The certain future Hall of Famer has more postseason victories than any other manager in Major League history, ranks fifth on the all-time regular season wins list and has posted a three-year record with the Dodgers of 251-220 (.533) through last night's game. He finished third in 2009 NL Manager of the Year voting.
"It has been an incredible honor to wear the Dodger uniform and I will always carry with me some very special memories from the past three seasons," said Torre. "This was not a decision I took lightly but I believe it's the right one for myself and my family and I'm truly thrilled that Donnie will be the one leading the Dodgers. It's time that the Dodgers had a new voice and I have the utmost confidence in him. I know he's ready for the challenge."

I've been critical of Don Mattingly in the past. The Dodgers rank 12th in the National League in total batting stats. To say the offense has been bad, would be an understatement. If he can't help this team as the hitting coach, how will he do as the manager? On any other team, Donnie Baseball would have been fired by now, not promoted.

He's managed in two games for the Dodgers. He made mistakes in both games. One was in the preseason, where the Dodgers were penalized for batting out of order because the lineup card that had been posted in the clubhouse, didn't match the one given to the umpires. The other was this past July when he vistited Jonathan Broxton on the mound twice, and Broxton had to be removed from the game.


Like a lot of other Dodger fans, I would like to have seen AAA Albuquerque Isotopes' manager Tim Wallach given an opportunity to manage the Dodgers. Wallach played for the Dodgers and  has the managerial experience.

Am I surprised the team made this move? No, not at all. This is the typical ass-backwards move made by Frank McCourt and Ned Colletti. Does this mean I want Don Mattingly to fail? Absolutely not. I want this team to win in 2011. Maybe Don Mattingly is the right choice to manage the Dodgers. I don't think he is. I hope I'm proven wrong.
Share |
Posted by Dodgerbobble at 10:15 PM