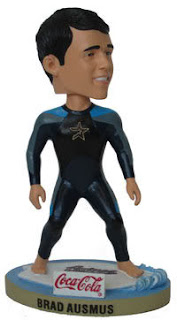 After playing 18 seasons in the majors, catcher Brad Ausmus retired today. In his last game, he went 2 for 4 with a single in his final at bat. He was removed for pinch runner Chin-lung Hu in the eighth inning. The crowd then gave him a standing ovation.


“I’ve never been an offensive player and to go out like that is great. There’s an old saying in baseball. You’re only as good as your last at bat. I think I’ll stick with that.”

From the Dodgers Press Release:

Ausmus started this afternoon's contest between the Dodgers and Diamondbacks, catching the 1,938th and last game of his career. The number leaves him all alone in seventh place on the all-time list, 10 games behind Tony Pena. The next closest active player to Ausmus is the Yankees' Jorge Posada, who has caught 1,573 after today.


Prior to the Dodgers' game against the Arizona Diamondbacks a video tribute to Ausmus was shown on DodgerVision and he was presented by Dodger General Manager Ned Colletti with a unique catching helmet that highlighted his career by featuring all of the key milestones and achievements, as designed by renowned artist David Arrigo.

"While the majority of his career was played in uniforms other than the Dodgers, his presence and positive impact on the team and the organization are greatly appreciated," said Colletti. "His talent, thought process, wit and candor will be missed by all who had the opportunity to know him as a teammate and a friend during his 18 years in the Major Leagues. The Dodger organization wishes him continued success and good health in the next chapters of his career."
In 18 seasons, Ausmus hit the disabled list just one time and that came earlier this season when he had surgery to repair a herniated disc in his back. Prior to the injury, Ausmus held a streak of the most consecutive seasons of not going on the DL among all active players.

Ausmus played 10 of his 18 big league seasons with the Astros, including from 2001-08. He was Houston's Opening Day catcher for nine of those seasons, including 2003-08. Ausmus is Houston's all-time leader for catchers with 1,243 games and 1,119 starts. He had started at least 100 games at catcher for 11 straight seasons until starting 62 behind the plate in 2008.

Including 2009, when he did not appear in any of the Dodgers' eight playoff games, Ausmus has been a part of six postseasons, including one World Series appearance in 2005 with Houston. He was an American League All-Star with Detroit in 1999, when he started 121 games, threw out 32 of 91 potential base stealers (35.2 percent) and established career highs with a .275 batting average, nine home runs, and 54 RBI.

Ausmus was the recipient of the 2006 Darryl Kile Award presented by the Houston chapter of the BBWAA, which is given annually to the St. Louis Cardinals and Houston Astros player who best exemplifies Kile's traits of "a good teammate, a great friend, a fine father and a humble man."

In 2009, Ausmus was Joe Torre's acting manager for the regular-season finale Oct. 4 vs. Colorado, a game in which the Dodgers won, 5-3. This year, Torre gave the reigns to the veteran backstop on Friday night and then Dodger infielder Jamey Carroll named Ausmus as his bench coach for last night's game.

Ausmus was originally selected by the Yankees in the 48th round of the 1987 First-Year Player Draft. He lives in Del Mar, CA with his wife Liz and their daughters Sophie (12) and Abigail (11).