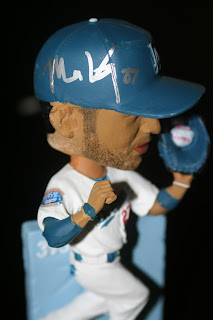 I found out earlier in the week that Matt Kemp would be making an appearance this weekend. I've made two previous attempts at getting Kemp's autograph in person, and had no success either time.

The first time was at a scheduled Macy's appearance in Northridge last year, which Kemp pulled out of, and was replaced by Clayton Kershaw. The second attempt was on August 21 of this year. That appearance was not organized very well and became a complete disaster. I had missed out on a Kemp in-person autograph for the second time. 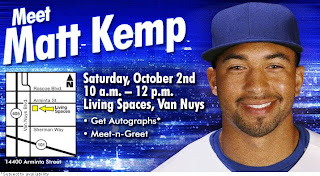 Today was different. The event was held at The Plant, which is a giant Living Spaces in Van Nuys. Kemp was scheduled to appear from 10:00am to 12:00pm. After finding out he would be signing for two hours, I became a bit more confident that I would get the autograph. But I still had my doubts. Matt's a popular player, and his appearances get crazy. Luckily, Van Nuys is 10 minutes from my home so I didn't have to travel far.

I got to Living Spaces and met up with Greg from Plaschke, Thy Sweater Is Argyle.  My buddy Tom showed up later. I also got to meet a few other people,  Eric, Richard and little Aaron. Great conversation kept us all occupied while we waited for Matt to show up.  We were about 255 people back. We knew that because of the wrist bands they handed out. The first 250 people got pink wrist bands, the next 250 got green ones. We were in the second group. 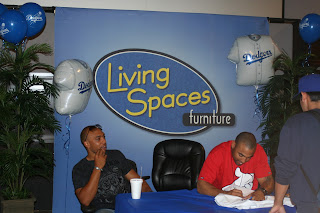 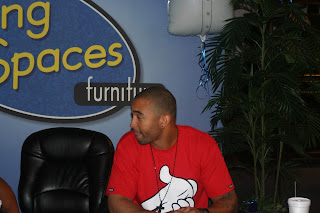 Well, Matt got there on time. The line moved into the store right away. They were letting ten people in at a time. As usual, they told us one signed item per person, and no pictures with Matt.  When we got to the front of the line, we saw people taking pics with him. Huh? OK, so we could take picture with him. Cool. 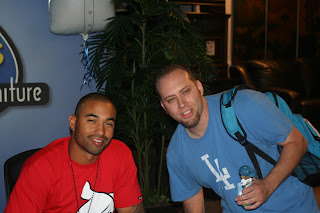 When it was my turn, I got my homerun-saving Matt Kemp bobblehead out and handed it to him. He asked where I wanted the signature, and which color Sharpie I wanted him to use. I told him on the hat with silver Sharpie. Then I built up the courage to ask him for a picture, and he said yes. Matt's my favorite player, so I was real nervous. 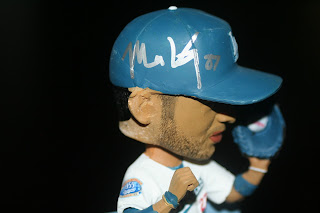 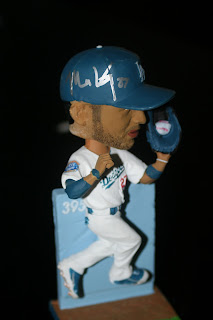 At the end of the day, this event turned out to be a great success. The staff at Living Spaces were very nice and organized.  I got what I wanted, an autograph and a picture. I also got to hang out with some great Dodger fans. I can't wait for the next Dodger event.
Share |
Posted by Dodgerbobble at 4:57 PM