Jimmy Campanis' WS ring found. A 40-year-old Azusa man has been arrested in the theft of Los Angeles Dodgers catcher Jimmy Campanis' 1988 World Series ring. The ring was taken from a pouch in his golf bag during a charity golf tournament in Chino Hills. 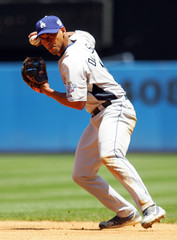 Ivan DeJesus Jr.is impressing in the Arizona Fall League. ESPNLosAngeles.com's Tony Jackson gives us the details on the Dodgers' future 2B.

Dodgers to open Dream Field in Northridge. The Dodgers Dream Foundation, in partnership with the LA84 Foundation and the L.A. City Department of Recreation and Parks, will open a new Dodgers "Dreamfield" Saturday at the Northridge Recreation Center.  Frank McCourt plans to be at the ceremony along with pitcher Hiroki Kuroda and former Dodgers Ron Cey, Steve Yeager and Lee Lacy.
Share |
Posted by Dodgerbobble at 11:43 PM