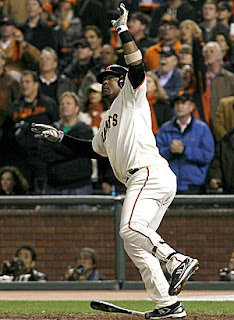 It looks like the Dodgers have signed Juan Uribe. He's probably gonna be the everyday second baseman. It's being reported that he's signed a three-year deal worth $21 million. When the rumors first started surfacing, I figured it would be on a one-year deal or a one-year deal plus an option, but not three guaranteed years? This for a guy with a career .300 OBP.

Yes, Juan Uribe can hit homeruns. He's averaged 15 a year over the last 10 seasons. He can play defense. He just can't get on base to save his life. I hope Ned doesn't think this is the answer to the horrible 2010 offense.

For everything Ned's done right this offseason, this is one huge wrong. The man didn't learn his lesson with Juan Pierre or Andruw Jones or Casey Blake? If he had signed Uribe on a one-year deal, I'd applaud him, but this is just a silly deal.

Uribe was a Type B free agent and the Giants had offered him arbitration, they will receive a compensatory draft pick between the first and second rounds.
Share |
Posted by Dodgerbobble at 8:38 PM