Is Hiroki Kuroda Close To Re-Signing With The Dodgers? 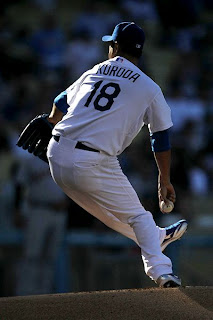 Is Hiroki Kuroda close to re-signing with the Dodgers? According to Ken Gurnick of Dodgers.com, Kuroda is on the verge of signing a one-year, $8 million deal to stay in Los Angeles.

If he does come back to play for LA, he'd be their fourth starter behind Clayton Kershaw, Chad Billingsley and the recently signed Ted Lilly. This would be a great deal for Ned Colletti and the Dodgers. It seems like he's trying to get the starting rotation wrapped up before he goes out and gets bats.

So who gets that fifth spot in the rotation? John Ely? Vicente Padilla? Carlos Monasterios?
Share |
Posted by Dodgerbobble at 8:22 PM