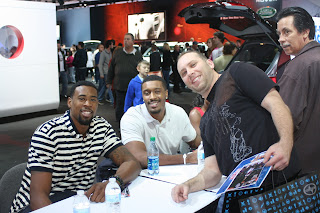 I took the family to the LA Auto Show today. It was a great time. There's some great new cars coming out. Anyway, we were strolling through the South Hall at the LA Convention Center checking out the Saabs, when someone from the neighboring Kia exhibit announced over the loud speaker that two members of the Los Angeles Clippers, DeAndre Jordan and Craig Smith, would be signing autographs. 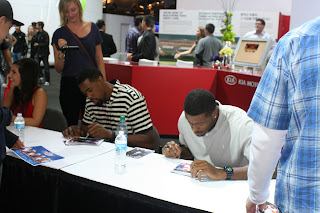 I had no idea they'd be signing. I knew former Laker AC Green was there Friday night and golfer Michelle Wie will be there Wednesday, but there was nothing on the show's website about Jordan and Smith. I just happened to be in the right place at the right time. Not that either one of them are stars, but it's still cool to meet a couple of young NBA studs.

I got in line right away. There were about 20 people in front of me. We were told they'd only sign one item each. I didn't have anything for them to sign. Luckily they had some free pictures at the signing table. I got to the front of the line and a Kia rep said she'd take a picture for me. When the guys were signing for me, I asked them if they saw any cars they liked at the show. DeAndre said he hadn't looked and Craig said he liked the Cadillac Escalade Hybrid. Nice. There were a couple of Clippers cheerleaders there too. They were very nice ladies who signed a picture for me. 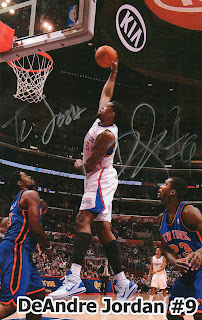 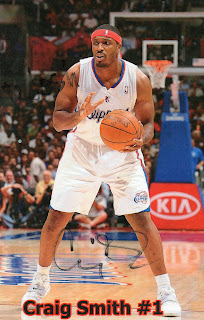 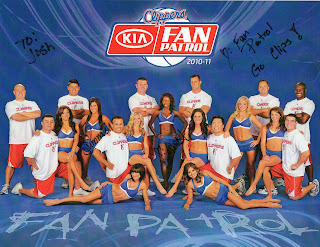 This season the Clippers are off to an awful start, 1-13. Despite having one of the top studs in the league in Blake Griffin, this team is going nowhere. Looks like they'll be lottery-bound again. Jordan and Smith are just role players on this crappy team, but it was nice of them to sign and represent the Clips today.Thanks again to DeAndre Jordan, Craig Smith, Kia and the Clippers for the autographs.
Share |
Posted by Dodgerbobble at 9:50 PM