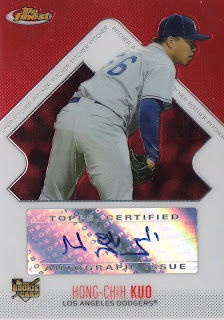 On Christmas, my wife gave me a couple of items for my two Dodger collections, a new bobblehead and a new card. I'll show the bobble in a future post. As for the card, she got me a 2006 Topps Finest Hong-Chih Kuo Autograph rookie.

I've got many Kuo cards, but no autographs in the collection, so I was real happy when I got this. I'm a huge fan of Kuo's, and I think he's gonna have a great 2011. I love Kuo in the Closer role if Jonathan Broxton faulters again. It's just a matter of how careful the Dodgers and Don Mattingly will be with Kuo and that elbow of his. 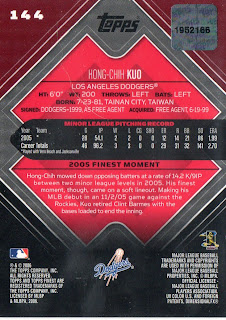 Yesterday, while reading up on fellow Taiwanese player Chin Lung Hu, I found out Hong-Chih Kuo had the second most plate appearances amongst Taiwan-born players in Dodgers history. My favorite Hong-Chih Kuo plate appearance of all time is his famous "bat flip". Back in 2007, the Dodgers played the Mets, and Kuo became the first Taiwanese born player to hit a homerun in the majors. He hit the homerun off of John Maine, who had just given up back-to-back homeruns to Wilson Betemit and Matt Kemp. After Kuo connected with the ball he flipped the bat and watched it go out. It was classic. Here's the video: