Are Matt Kemp And Rihanna Through? 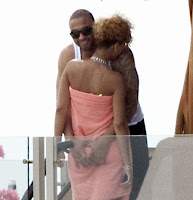 Could this be the news Dodger fans have been waiting for? I'm not the type to read the tabloids, but this story caught my eye.


Matt Kemp and Rihanna have been dating for quite a while..Throughout their relationship, rumors of cheating on both sides surfaced daily..Now the baseball star and his pop star girlfriend have called it quits.With Kemp smack dab in the middle of his off-season, and Rihanna traveling the globe promoting her music, the two slowly drifted apart..Kemp’s penchant for clubbing was also partly to blame  for the demise of their relationship..My sources tell me Kemp left a Hollywood club last week with two girls in tow and brought them home..My eyewitness who was there, tells me the two girls both crashed in Matt’s room the entire night..I doubt he was reading them bedtime stories..Rihanna was ready to move on as well..Her reported romance with Drake was semi responsible for the fights that eventually lead to the split..I wouldn’t be surprised if they rekindled a few times..but my source tells me it’s officially over.

It would be foolish of me to blame Matt Kemp's terrible 2010 season completely on his relationship with Rihanna, but I've always felt it had something to do with his decline. Playing baseball in Los Angeles had Kemp in the spotlight, but dating an international popstar kept more attention on him than he needed.

Do I think his relationship with Rihanna got to his head? Maybe a little. Could this breakup help him get back to the baseball player he was in 2008 and 2009? I hope so. Maybe now he can concentrate solely on baseball.
Share |
Posted by Dodgerbobble at 6:56 PM