Bobblehead Of The Day: Shawn Green

Today's Bobblehead of the Day is Shawn Green. I think my favorite memory of Shawn Green was his four homerun game on May 23, 2002. Green hit four home runs in one game against the Brewers. He also set the record for most total bases in one game, 19,after going 6 for 6, with a single and double to go with his four home runs. I'll never forget that game. It was a day game,and I had to listen to it on the radio at work. The whole time I wished I was at home watching.

On Thursday, July 18, 2002, the Dodgers gave away Shawn Green bobbleheads to the first 50,000 fans in attendance. Presented by Albertsons Supermarket, this bobblehead was made by BD&A. This was the second of three bobbleheads given away that year. The other two were Paul LoDuca(5/31) and Hideo Nomo(8/24).

The Dodgers played the San Diego Padres that day and lost 4-1. Andy Ashby started for the Dodgers, Brett Tomko for the Padres. Brett Tomko got the win(yes, he did win games). Shawn Green went 0 for 3 with a walk on his bobblehead day. 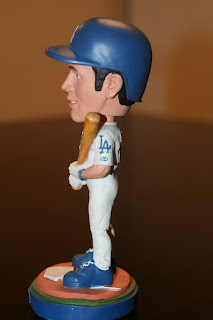 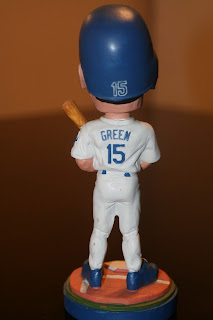 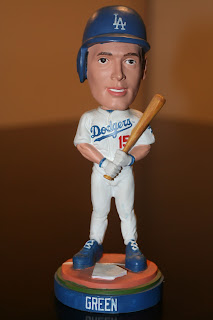 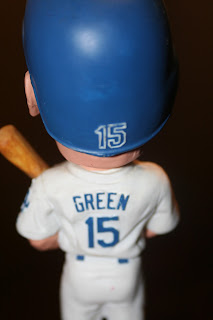 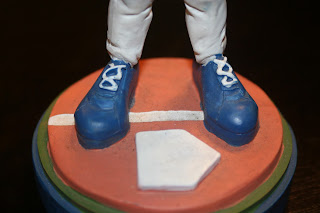 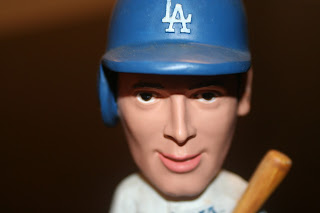 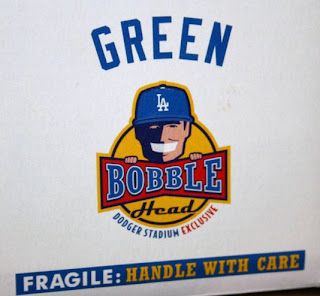 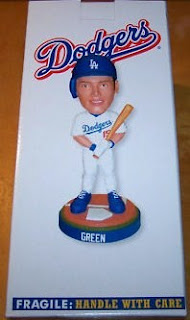 This is another one of those BD&A bobbles with the giant clown feet. I don't understand why they gave the bobble this feature. I do think they did a great job of making this look like Shawn though. The facial features are pretty similar to the real Green.

That's it for the 2002 bobbleheads. I'm almost done with displaying the entire SGA collection. I can't wait to start getting some of those 2011 bobbles.
Share |
Posted by Dodgerbobble at 9:29 AM