Dioner Navarro Coming Back To The Dodgers 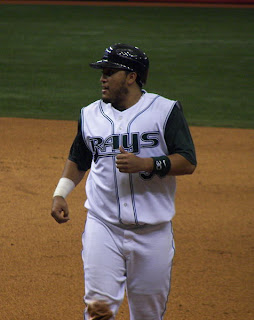 The Dodgers have reached an agreement with catcher Dioner Navarro.


Former All Star and former Dodger Dioner Navarro has agreed to terms to compete with A.J. Ellis as backup to starting catcher Rod Barajas, according to multiple baseball sources, pending passing a physical exam.

Navarro was non-tendered by Tampa Bay last week. The 26-year-old switch-hitter came to the Dodgers from the Yankees in the 2005 three-team trade that sent Shawn Green to Arizona and Randy Johnson to New York.

Navarro opened his rookie season as the Dodgers' starting catcher, but injured his wrist and quickly lost his job to Martin. Halfway through that season, Navarro was traded with Jae Seo to Tampa Bay for Toby Hall and Mark Hendrickson.

Told he would not be on Tampa Bay's postseason roster for the first round of the playoffs, he left the club and went home, assuring his non-tender. He was in the second year of a two-year, $4.2 million contract.

Now Navarro becomes a low-risk potential long-term replacement to Martin. The short-term replacement is Barajas, signed to a $3.25 million deal as the starting catcher, presumably to team with Ellis, who now must compete with Navarro to stay in the Major Leagues.

Once again, I'm jumping for joy.
Share |
Posted by Dodgerbobble at 8:59 PM