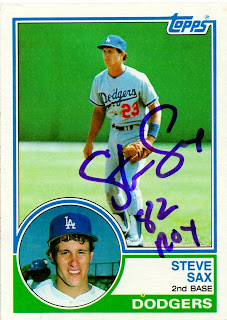 Former Dodger second baseman Steve Sax made an appearance today at Canter's Deli in Los Angeles. Sax was scheduled to make a business presentation at 1:00 pm. He followed that up with an autograph session for his book "Shift". 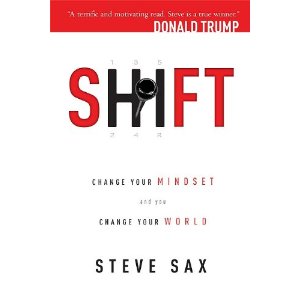 I got there a bit early, 2 hours early to be exact. When I walked in, I saw Steve setting up for his business presentation. I walked up to him and asked him when the event was to begin, and he told me 1pm. He introduced himself to me and shook my hand. Then he introduced me to his associates and asked me if I wanted to join them in the bar area for lunch. How could I say no? 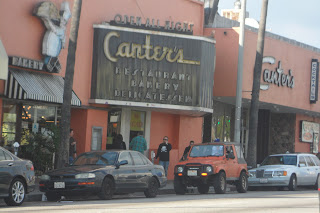 So, we went to the bar, and there was pastrami and rye bread and pickles on the table. It was an amazing spread. If you haven't been to Canter's, you gotta try it. The food is so good. Steve introduced me to Canter's owner Gary Canter, who is a one of the funniest people I've ever met. He told us a few stories that were straight out of old Hollywood. We ate, chatted and watched the Chiefs/Saints game. It was a great time. Before I knew it, it was 12:30. 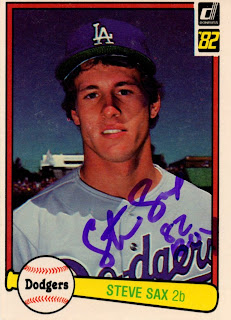 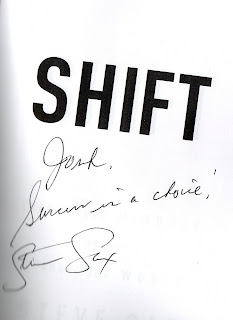 Sax went back to the presentation area, and finished setting up. I noticed a few Dodgers fans come in. He started signing. That's when I asked him to sign my baseball cards. I also bought his book. He signed that for me as well. Just then, Roberto from Vin Scully Is My Homeboy came in. We chatted a bit, then he took a picture of Saxy and me. I also got to meet a couple readers of my blog, Mike and Gus. It was great meeting both of you in person! 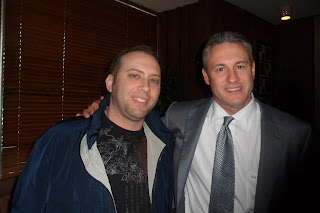 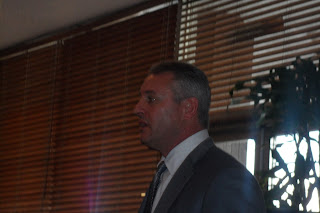 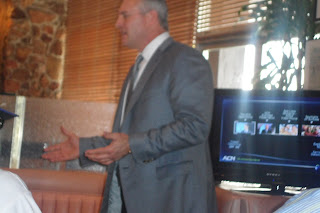 Finally, 1 o'clock had arrived, and Sax began his presentation. He was talking about ACN, which is a telecommunications company that provides services such as local and long distance calling, Internet, wireless, home security, satellite TV and video phones. It was an interesting one-hour presentation. While Sax was talking, Dodger fans were starting to trickle in. I already had my autographs, so I split as soon as he was done.

Before I left, I had to stop at the Canter's bakery, which is just as amazing as the deli. I had to get their cheesecake. It's so damn good. 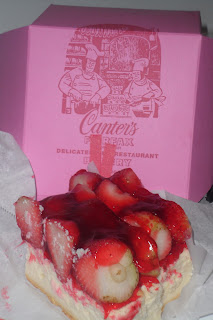 I had a great time today. I don't think I will ever forget my experience. I can say I had lunch with Steve Sax! Thanks again to Roberto from Vin Scully Is My Homeboy for all the info on today's event. Thanks to Gary Canter for all the food and drinks. And of course, thanks to Steve Sax. It was very nice meeting you.
Share |
Posted by Dodgerbobble at 5:07 PM