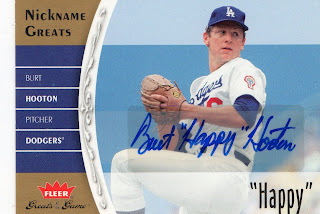 Burt "Happy" Hooton turns 61 today. He was nicknamed "Happy" by Tommy Lasorda because he rarely smiled. From Tommy's autobiography:

"He became Happy Hooton on New Year's Eve. Normally, he looks about as happy as a farmer during a drought, but when I caught him playing solitaire during a New Year's celebration, he earned his nickname, and he's been Happy ever since."

Hooton had a great start to his career. On April 16, 1972, in only his fourth major league game, he pitched a no-hitter for the Chicago Cubs. His best years came as a member of the Los Angeles Dodgers though. 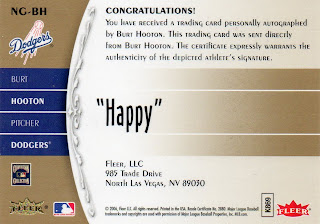 On Happy's birthday, I'd like to show his 2006 Fleer Greats of the Game Nickname Greats, NG-BH. The signature is on sticker, but it's still a pretty cool card.
Share |
Posted by Dodgerbobble at 8:54 PM