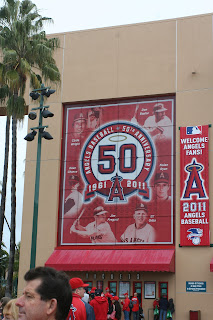 Last Sunday, the Anaheim Angels held their Fan Fest. The event was held at the Angels Stadium parking lot. Tickets were $5 and it also got you into the Angels/Padres game at 2:00. The event was scheduled from 8:00 am to 4:00 pm.

The Angels' website said there would be players signing autographs, but it wasn't specific. Since I'm not an Angels fan, my only interest were the autographs. When my buddy Tom and I got down there, we noticed there four autograph stations. There were two players at each station. They would be signing for 45 minutes, then get replaced with someone else from the team. There was no player schedule, it was all  random.

We walked from station to station trying to figure out which one was best, because the lines were very long. We decided to go with  the Brandon Wood line. Wood, who is probably the most over-hyped prospect in Angels history, was signing with infield prospect Alexi Amarista. We stood in line for 30 minutes. I had them both sign my Snoopy Angels bobblehead.


﻿
We started searching for the next best line. We discovered Bobby Abreu was signing, so we rushed to that line. I'm not sure how long he had been there, but we waited for about 30 minutes in line, then he got up and walked away. Actually, all the signing players left their stations because it was time for batting practice. There would be no more signings until BP was over. The next session was to start at 12:45.

It was only 11:00 at this point. There was going to be a lot of down time until the players returned. Tom and I talked about this, and we both agreed the Angels missed a good opportunity to bring some veteran players to the booths to sign for the fans. Instead, everyone had to wait nearly two hours for the next session.

There would only be one more signing session for the day. Since we didn't know who would be signing at any of the four stations, we had to pick one and just hope there were some good players there. We picked a line. After standing in the sun for an hour and forty-five minutes, a cart rolled up. Three players showed up to the station we were at.  It was Fernando Rodney, Jason Bulger and Scott Kazmir. I wasn't thrilled. Later we found out Jared Weaver was signing in the station behind us. I had Rodney and Bulger sign Snoopy and Kazmir signed a card.

Once we got our signatures, we went and got some of the free swag that was being given out. Rex Hudler was interviewing Rod Carew and Tim Salmon on the main stage, so went and checked that out. When that ended, Tom tried to get Rod Carew's autograph. He nearly got the signature, but there were hundreds of people mobbing the Hall of Famer. 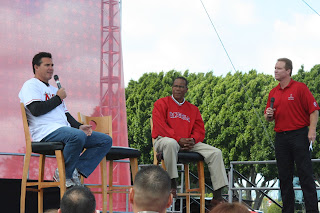 At that point, it was 2:00, game time. The crowd at the Fan Fest all headed toward the stadium. Before we left, we stopped and took a picture with the Angels' Rally Monkey. 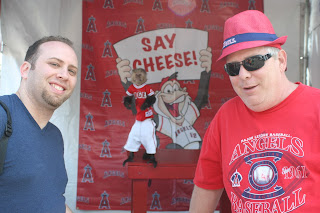 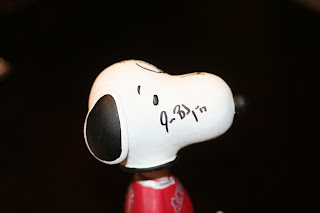 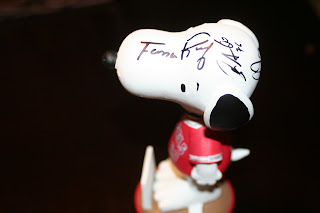 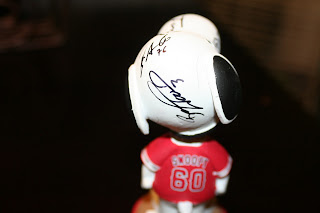 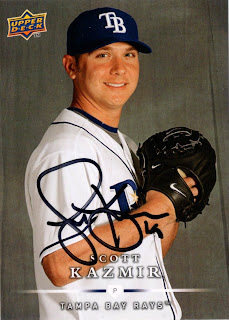