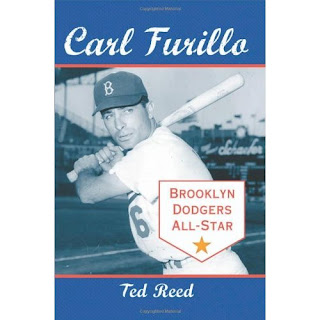 I just finished reading the book "Carl Furillo, Brooklyn Dodgers All-Star". This book was written by Ted Reed and published by McFarland Publishing.


History has remembered Carl Furillo as an opponent of Jackie Robinson becoming a member of the Brooklyn Dodgers, despite that being untrue. This biography sets the record straight, while also detailing Furillo’s contributions as a clutch hitter and an outstanding right fielder, his angry departure from the team, his hearing before the commissioner of baseball, and his life after the sport.

I've read so much on Sandy Koufax, PeeWee Reese, Duke Snider, Gil Hodges, Jackie Robinson and other Brooklyn Dodgers, but I didn't know much about Carl Furillo. After reading this book, I can say that Carl Furillo, The Reading Rifle, is now one of my favorite Dodgers of all-time.

In the book, Reed gives the details on Furillo's professional career, from his start in Reading, Pennsylvania to his falling out with the Dodgers in 1960 . 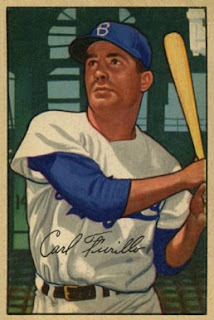 Ted Reed also sets the record straight on Furillo's involvement, or lack thereof, in the opposition of Jackie Robinson's integration of baseball in 1947. It was thought he was part of a group of players that was opposed to the integration. With the help of Carl Furillo's son, Carl Furillo Jr. and others, Reed sheds light on the events and what really happened.

Carl Furillo Brooklyn Dodgers All-Star was a great read. I highly recommend this for any Dodger fan or for anyone interested in the history of the game.

I want to say thanks to Ted Reed and McFarland Publishing for sending me the book and staying in touch with me.

You can purchase Carl Furillo, Brooklyn Dodgers All-Star at McFarlandpub.com or at Amazon.com.
Share |
Posted by Dodgerbobble at 10:06 PM