We're two weeks away from Opening Day. Woohoo!
Anyway, here are some notes on this Thursday: 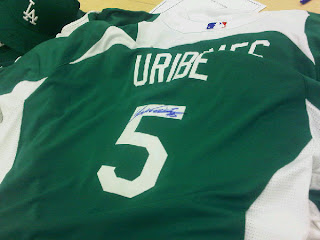 The Dodgers wear green uniforms for St. Patty's Day. The boys, who are normally in blue, wore green hats and jerseys for St. Patrick's Day. Those jerseys were signed and auctioned off for the Dodgers Dream Foundation. 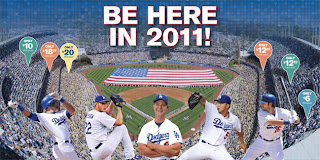 Dodgers reassign Jerry Sands to minor league camp. I think many of us want to see him play in LA now, but the truth is, he needs some more time in the minors. He'll probably start the season in AA Chattanooga. We could see him called up to the big club in September.

Jay Gibbons gets new contacts. Gibby, who is 2 for 22 so far in Spring Training, had his eyes checked in San Francisco, and was fitted for new contact lenses. Let's see if this helps him at the plate.

Is Darren Dreifort considering a comeback? The former Dodger, who hasn't pitched since 2004, visited Camelback Ranch this week as a guest instructor on the Minor League side. He threw a bullpen session and batting practice and hinted at a return to the majors. He'll be 39 in May. Dreifort retired at age 32 because of a condition that cursed him with weak connective tissue and led to 12 operations on his elbow, hip, knee, shoulder and ankle.

New Dodger billboards. The Dodgers have a new ad campaign. They've gone away from the "This Is My Town" ads and have come up with "It's Time". Roberto at Vin Scully Is My Homeboy shows us some of these new billboards.
Share |
Posted by Dodgerbobble at 9:00 PM