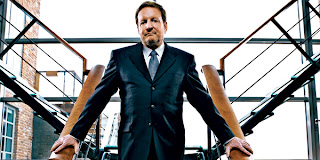 Steve Garvey, Ron Burkle: Dodgers owner? The former Dodger great says he has an investment group put together that would like to buy the team. That group now includes Ron Burkle. So, who is Ron Burkle? Well, he's rich. Forbes estimates his net worth at $3.2 billion. He's also familiar with purchasing a sports franchise. He teamed up with hockey legend Mario Lemieux in buying the Pittsburgh Penguins back in 1999. Garvey says he has six to eight other investors in his group.

Colletti and McCourt haven't talked takeover. Ned Colletti said Friday that he's been in communication with team owner Frank McCourt, but only through texts. They've only discussed roster moves, injuries and on-field issues. They haven't met in person since MLB took over the team, and they haven't discussed the takeover. Ned Colletti says he still considers Frank McCourt his boss.

Selig has support of MLB owners. From Tim Brown of Yahoo Sports:


Selig’s seizure of the team is being guided in part by the concerns and frustrations of many of McCourt’s fellow owners, who fear the devaluation of their own franchises through McCourt’s financial and operational ineptness, sources said Thursday.

Whatever the assurances by McCourt that the Dodgers are not trundling toward ruin, and whatever the assertions by McCourt’s new vice chairman Steve Soboroff that Selig is a misguided, uninformed bully, Selig’s greatest authority lies in the consensus of The Other 29.

Selig spends large portions of his days conferring with owners of the 30 MLB teams, and McCourt’s ownership practices have been picked over by baseball’s executive council, which consists of eight owners, four from each league.

It doesn't seem like the rest of baseball's owners are happy with McCourt's situation. What happens in LA, as well as other major markets, can affect the rest of the league.
Share |
Posted by Dodgerbobble at 11:29 PM