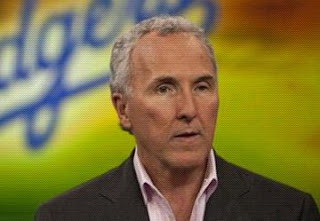 Before tonight's game between the Dodgers and Padres, ousted owner Frank McCourt issued an apology to  fans on Dodgers Live. Here's what he had to say:

"There's one thing I do want to say, 'cause I  haven't talked much over the last 18 months about my personal situation. In the last couple of days I've had a lot to say, but the most important thing I have to say this evening to Dodger fans is, that I'm sorry. I wanna just issue an apology to them for my personal mess having affected their lives and I wanna apologize for some of the lifestyle decisions I've made and I wanna apologize for any embarrassment I've caused  this community, this team and these fans. That said, I'm gonna fight for these fans. I have work to do to regain their trust and confidence, but I plan to do it and I'm gonna redouble my efforts to make sure I do get their trust and their support again and that I fight for what's mine, and I fight for these players out here and fight for this team."

It's probably too late Mr. McCourt, much too late.
Share |
Posted by Dodgerbobble at 7:46 PM