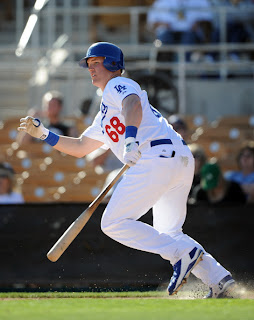 We all knew he was coming, but who knew it would happen this soon? Dodgers top prospect 1B/OF Jerry Sands was called up from AAA Albuquerque to the Dodgers today. To make room for Sands on the roster, the Dodgers designated Xavier Paul for assignment.

Sands is on fire right now, batting .400 with five homeruns and 17 RBIs at Albuquerque. With the Dodgers in an offensive funk, it makes sense to get his hot bat into the line-up. And they're wasting no time doing that. Sands will bat 7th tonight and play left field.

The Sandman will be patrolling left field tonight, but he can also play firstbase. So, should James Loney be worried? In 16 games this year, Loney is batting .150 with one homerun, 6 RBI and an OBP of .175. I'd say he has something to worry about. If things don't get better, Loney could be benched for the hot bat. Maybe this will burn a fire under James.
Share |
Posted by Dodgerbobble at 4:51 PM