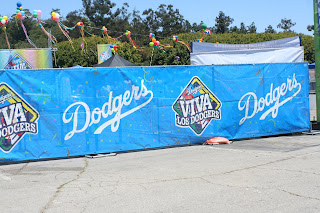 I attended "Viva Los Dodgers" Day at Dodger Stadium today. They had all the usual festivities, mariachi bands, dancing, raffles and giveaways. The Dodgers also raised funds today for tornado relief in the southern states. Many players and coaches signed autographs for the fans in attendance. For a $5 donation, you were able to get one autograph. The whole event was spearheaded by Dodger reliever Lance Cormier, who is originally from Tuscaloosa, Alabama, one of the hardest cities hit by the tornadoes.

Tommy Lasorda was there too, taking pictures with the fans and the 1981 World Series trophy. Jim Campanis was also there, as the original schedueled autograph alley signer.

I got there early, and headed straight for the Don Mattingly line. The line moved quickly. I had Donnie sign his 1987 Donruss Yankees card. 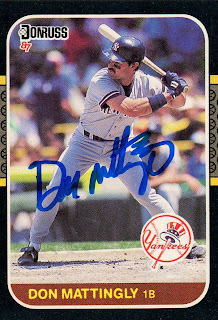 Next was Rick Honeycutt. I had him sign a ball. I wasn't paying attention, and he signed the ball with Sharpie. Oh well. 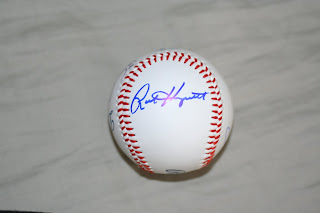 Next was Clayton Kershaw. Surprisingly, his line only took about 15 minutes to get through. Marcus Thames was signing at the same table and they let us get both signatures for the $5 donation. I had Kersh sign a card and Thames sign my hat. 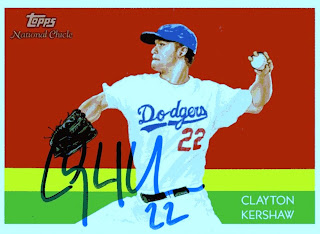 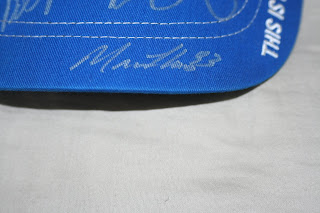 I got in the Tommy Lasorda line next, but missed him by just a few people. I wasn't too upset because I've met Tommy before. As I walked away, I ran into Dodgers photographer Jon Soo Hoo.

At that point, the game was about to begin and people were heading to the stadium. Jim Campanis was still there signing,so I got in his line. He was very nice. He signed a card and my hat. He also took a picture with me and let me wear his World Series ring. 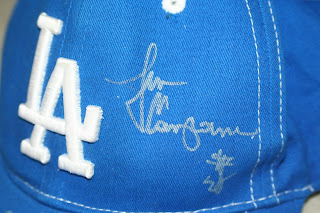 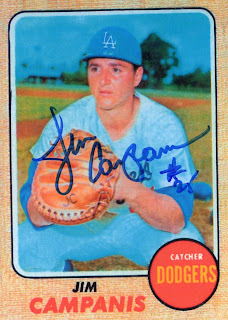 I had a great day today. I hope the Dodgers raised a lot of money! Thanks to Theresa for everything today. It was nice seeing Simon, Jason, Javier, Gustavo and Joseph. If I missed anyone, sorry. And thanks to Vin Scully Is My Homeboy for all the info on today's event.
Share |
Posted by Dodgerbobble at 3:22 PM