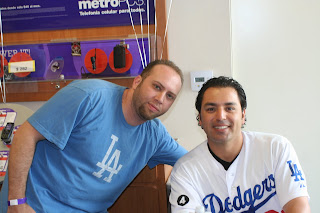 Dodger catcher Rod Barajas made an appearance at the Metro PCS store in Panorama City today. He was scheduled to sign from 12:00 to 1:00. My original plan was to head over to the signing on my lunch break since Panorama City is only about ten minutes from my office, but I woke up feeling like crap today and called out. So, after thinking about it all morning, I decided to get out of bed and head over to the event.

I got there at 9:30, there were about 50 people in line. I figured I might be able to get a couple of signatures. While waiting in line, I started talking to the guy behind me. He turned out to be Spiegel from Nomo's Sushi Platter. It's nice to have someone talk to while waiting, it really makes time fly by. 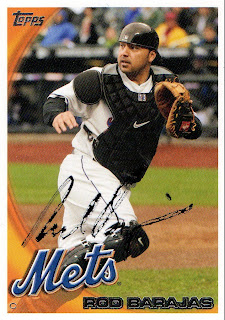 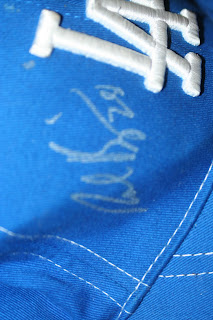 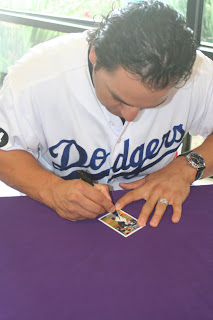 Barajas appeared on time, and the line moved very quickly. When I got to Barajas, I had him sign a 2010 Topps Mets card. I wasn't paying attention, and forgot to give him my silver paint pen, so he signed it in black sharpie, and it smudged. He was very nice and signed my hat too.

When I got out of the Metro PCS store, I noticed the line wasn't very long, so I got back in it. Someone was selling baseballs, so I bought one.  Barajas signed the ball and a postcard for me the second time around. 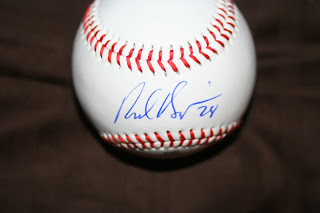 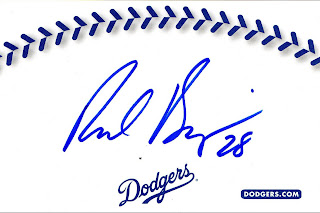 When I left at 12:40, there was no one left in line. Thanks to Rod Barajas for all the autographs.Thanks to Metro PCS for the event. And thanks to Vin Scully Is My Homeboy for the event information.  It was also nice meeting Mike from Nomo's Sushi Platter in person. I saw about 12 other people I know today, it was nice seeing everybody.
Share |
Posted by Dodgerbobble at 9:16 PM