Before I get into the news, I want to congratulate Format on winning tonight's Don Mattingly bobblehead contest. That's two in a row for Format. These contests are getting very interesting, I'm getting answers to my trivia questions in a matter of seconds. For those who didn't win, we'll be giving away another bobblehead very soon.

It's been a while since I posted bobblehead news. Here's a couple of tidbits from the world of bobbleheads: 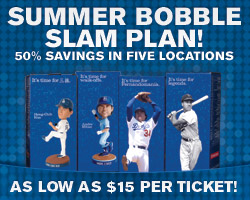 Summer Bobble Slam Plan. For those Dodger fans interested in the getting the remaining four bobbleheads, the team is offering a new mini plan, the Summer Bobble Slam Plan. You'll get the four games that include all of this year's remaining bobbleheads. Hong-Chih Kuo's patented fist pump, Andre Ethier in the "throwbacks"...a salute to "Fernandomania"...and a tribute to "the Duke"...All starting at just $15 a seat!  Sounds like a good deal to me. 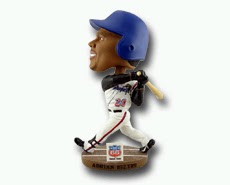 66ers to give away Beltre bobbles. This Saturday(June 11), the Inland Empire 66ers, Single-A affiliate of the Anaheim Angels, will be giving away Adrian Beltre Big Head bobbleheads. This bobblehead will be given away to the first 1,500 fans in attendance. Oh yeah, it's also Star Wars Night at the stadium.

The Mets Bobblehead Curse. Since 2002, nearly every player who has been commemorated with a bobblehead sponsored by Gold’s Horseradish has already been injured, gotten injured or ended up performing poorly. The list of players hit with the horseradish curse includes Mike Piazza, John Franco, Kaz Matsui, Pedro Martinez, Paul LoDuca, Francisco Rodriguez, Johan Santana and Jason Bay. The streak will continue in 2011, as July 19th's bobblehead recipient, Ike Davis, hit the Disabled List this week.

Pearl Jam bobblehead. This past Friday, the Seattle Mariners gave away bobbleheads of Pearl Jam guitarist Mike McCready. The limited edition bobbleheads were given away with the purchase of tickets that helped raise funds for the Crohn's & Colitis Foundation of America.  I wish I had one of these in my collection. I checked on ebay, and they're not selling cheaply. 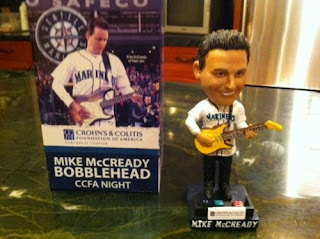