We're a little more than half-way through the baseball season and there have been some great bobblehead giveaways so far. Usually, I  talk bobblehead news once a month, but July's been one of the better months. So, here's some more  news from the bobblehead world:

Twins honor 1991 World Series Champs. The Minnesota Twins will be selling a 20th anniversary set commemorating the 1991 World Series Championship team. The set will include all 25 players and manager Tom Kelly. 1,000 sets will go on sale Monday, July 18 at 9am. They will be sold for $391 and all proceeds will go to the Minnesota Twins Community Fund. 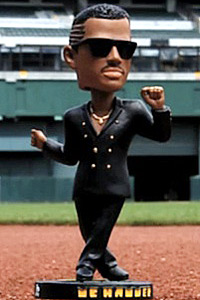 Hammer Time. The MC Hammer bobblehead, which I've mentioned in the past, will be given away by the Oakland Athletics to the first 15,000 fans in attendance today.Before he was known as Hammer, Stanley Burrell worked in the A's clubhouse from 1973 to 1980. 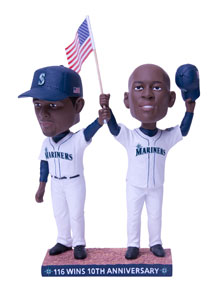 116-win Seattle team honored. This past Friday, the Seattle Mariners celebrated 2001's 116-win team by giving away Mike Cameron/Mark McLemore bobbleheads to the first 20,000 fans in attendance. The bobblehead depicts the two players holding an American flag together. 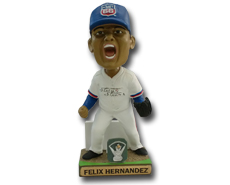 King Felix gets a Cy Young Bobble.  OK, this isn't a July promotion, it's an August promotion, but the pictures were finally released this month. The Inland Empire 66ers will be giving away Felix Hernandez Cy Young  bobbleheads on August 20. Hernandez played for the 66ers in 2004.

And in some non-sports bobblehead news...


Clarence Thomas gets a bobblehead. Justice Clarence Thomas is the latest Supreme Court Judge to be honored with a bobblehead. Created and distributed by Green Bag, a quarterly law review, this bobblehead has Thomas holding an American flag and standing on two pizza boxes.  And no, there isn't a coke can with a pubic hair on it. The bobbleheads will not be for sale, and will only be made available to Green Bag subscribers. Here's a breakdown of the Thomas bobblehead: 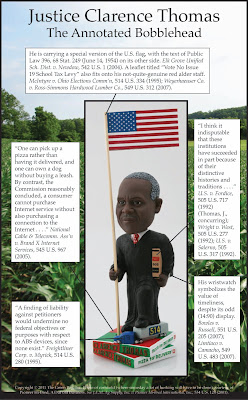 You can see the rest of the Supreme Court Justice bobblehead collection here.