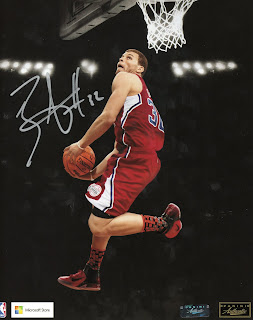 Los Angeles Clippers Forward, and 2010-2011 Rookie of the Year Blake Griffin made an appearance in Century City yesterday. This was one of many events held for the grand opening of the newest Microsoft Store.

Blake Griffin was scheduled to appear from 5-7 pm. He was there promoting Kinect for XBox 360, so they were giving some of the people in line the opportunity to play Kinect with Blake. I arrived very early, 6 hours early! I was expecting a huge line when I got there, but I was wrong, I was only the third person there. The Facebook page for the event said there would be no lining up before 1pm, but people started trickling in, so the event staff formed a line at 11:30. The first fifty people or so were given numbered cards, not wristbands. Fans with numbered cards would get the chance to play Kinect with Griffin.

The event was at an outdoor mall, and it got hotter and hotter as the day went on. The Microsoft staff was on top of it though, passing out water to everyone and setting up umbrellas for us to sit under. They also handed out tons of swag, including t-shirts that most of us used to cover our heads. There were also raffles being held for the people in line. Prizes included XBox 360 games and XBox Live subscriptions. 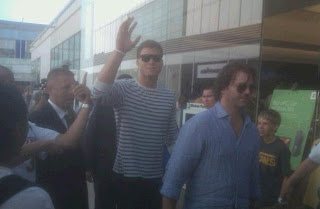 By the time five o'clock came, there were hundreds of people in line. Blake arrived just a few minutes late, but when he walked up to the Microsoft Store, the crowd went crazy. Before letting us in, we were told he wouldn't sign any outside memorabilia and that no photography was allowed. I was kind of bummed because I brought a basketball from the 2010-2011 All-Star game in Los Angeles to get signed, and of course I wanted to take tons of pictures.

Once the line started moving, they took us in groups of ten. We were told to put our cameras and phones away. When I got to the front of the line, security took my bag, asked me my name and asked me if I wanted to play Kinect with Blake. I told them I did want to play Kinect, so security introduced me to Mr. Griffin, he shook my hand, signed a promotional picture, then took a picture with me. I was rushed out of there without getting the opportunity to play Kinect! On the way out, Panini handed everyone a certificate of authenticity, which I thought was a very good idea, since they wouldn't let us get anything else signed. 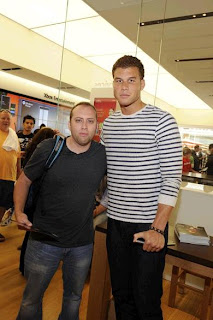 At the end of the day, I was very happy with the autograph, although I would have been happier with my ball signed. The entire event went smoothly. Thanks to Blake Griffin and the Microsoft Store for everything! Also thanks to Alejandro for the event info. It was great seeing everyone yesterday. I had a great time hanging out with Alejandro, Tom and Gabriel.
Share |
Posted by Dodgerbobble at 7:04 AM