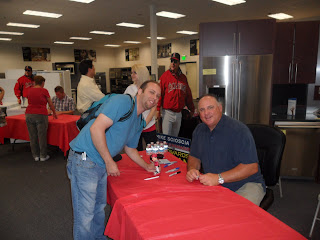 Anaheim Angels Manager and former Dodgers catcher Mike Scioscia  made an appearance at Howard's TV in Irvine yesterday. Scios wasn't alone. With him at the event was Angels first baseman Mark Trumbo. They were scheduled to appear from 10:00 am-Noon.

I arrived in Irvine at 6:30 and there were already 100+ in line. I brought my Mike Scioscia Angels bobblehead and a Mark Trumbo 2011 Bowman card to get signed. Waiting in line for almost four hours, I was chit-chatting with everyone around me, and I forgot to prep the glossy Bowman card for signing. Huge mistake. 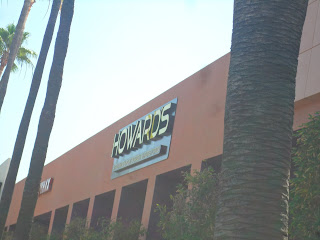 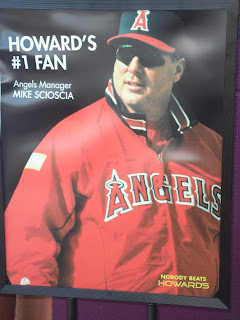 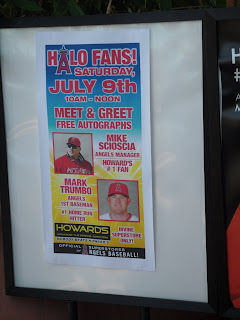 Once it was my turn in line, I had my bobblehead signed, then I handed Trumbo my card.  He tried to get as much of the gloss off as possible, but it didn't work. The signature smudged. I was a little disappointed in myself for making a rookie mistake. That's the second time in the last few weeks I've forgotten to prep a glossy card for signing. I think I'm done bringing glossy cards to signings altogether. 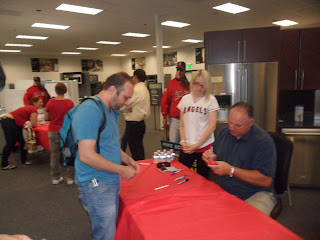 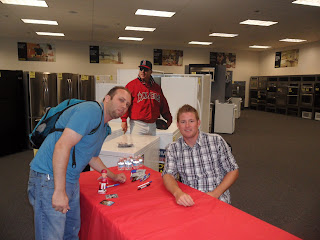 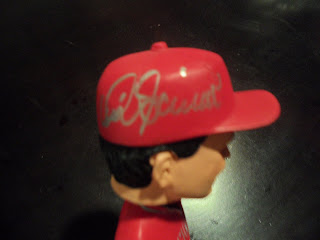 As I was walking towards the parking lot, I noticed the line wrapped around the complex. There must have been at least 500 people in line, if not more. I'm not sure when the signing ended, but I can't imagine they signed for everyone. This was the first Angels event I've been to with a large crowd. The fans really came out for this one. But I did see a lot of Dodger fans too. It was nice to see Angels and Dodgers fans co-existing peacefully!

I did have a great time though. I was really there to get Mike Scioscia's autograph, Trumbo was merely a throw-in. It was nice seeing everyone yesterday. Thanks to Kenny and Alisha for the chair, you two saved me from hours of discomfort. Also, it was nice seeing the winner of Friday night's Andre Ethier bobblehead contest, Eddie. After winning the contest, we talked for a bit, and realized we would both be at the Scioscia event.  We met as soon as I got there, and I gave him his prize. Congratulations again Eddie! Thanks to Vin Scully Is My Homeboy for event info and thanks to Think Red Instead for the Trumbo update.