The Joy Of Completing A Project 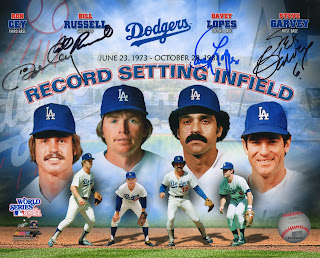 Back in May, former Dodger Shortstop Bill Russell made an appearance at the local Sports Authority.  It was at that appearance that I decided I was going to work on getting autographs of all four members of the great Dodger infield, First Baseman Steve Garvey, Second Baseman Davey Lopes,  Third Baseman Ron Cey and of course, Russell. I picked up a picture of the foursome, and got Bill Russell to sign.

Two weeks later, I got Steve Garvey's signature. Then in June, I got Ron Cey. The only one eluding me was Davey Lopes. After finding out he would be doing Dodger Day at the LA County Fair on September 15, I realized it falls on a Thursday, the only day of the week I have to be in the office. If I wanted to complete this project soon, I would have to go to Dodger Stadium or take my picture to Frank & Sons.

I decided to take a shot at Dodger Stadium first. Tuesday night Mrs. Dodgerbobble and I met Alejandro at the Ravine, and we headed straight for the Field level. I wasn't down there for more than two minutes, when Davey Lopes walked past me. I had no time to react, I pulled out the picture, handed it to him, and noticed I didn't have my black Sharpie. The other three signatures were in black. Lopes was signing someone else's picture in blue Shaprpie when he grabbed my pic. He signed mine in blue too.  I was a little disappointed that his auto was a different color from the other three, but I was still happy to complete the picture.

While we were at Dodger Stadium, I got a few more autographs: 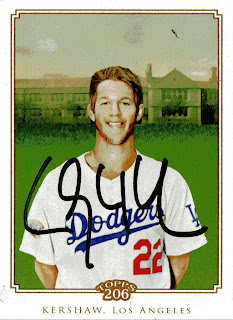 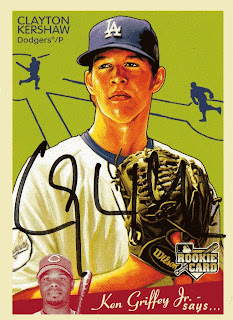 I had a great time that night. I completed my infield project. I got a few autographs. I heard some great Beatles tunes. Andre Ethier hit a Grand Slam, and the Dodgers won!
Share |
Posted by Dodgerbobble at 10:13 PM