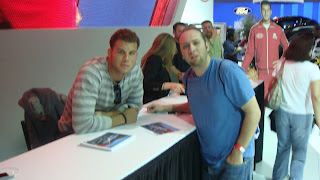 Last Saturday I went on a journey that landed me not one, not two, but three autographs. That first auto was from Hall of Famer Tony Gwynn and I had to drive 150 miles away to San Diego to get it. I got the next two in Downtown LA on my way home. LA Clippers All-Star Forward Blake Griffin and Skateboarder Rob Dyrdek both were signing at the Los Angeles Auto show at the Convention Center.

Tony Gwynn's appearance was scheduled for 9:00 am and my friends and I were at the front of the line. Tony began signing right away so we were able to leave San Diego at 9:30. We still had a chance to get to LA for the 1:00pm Blake Griffin appearance. While on the freeway heading home, we were getting updates from my buddy Alex who was already at the Convention Center waiting in line for Griffin. He told us there were only 10 people in line. Things were looking good.

It took us about two and a half hours to get to the Convention Center. When we arrived, we were about twentieth in line and it was an hour before the signing. The four of us got wristbands and we were told Blake wouldn't sign any outside items but he would take a picture with us. Kia Motors was giving away 8x10 pictures for him to sign, plus certificates of authenticity from Panini. 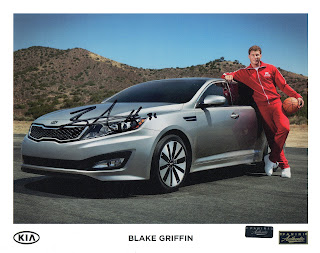 Once 1:00 rolled around, we were told Blake was running late. He finally showed up at 1:15 and started signing right away. When I got to the front of the line he signed the Kia picture for me and posed for a pic. He asked me if I was having a good time at the auto show and I moved on.

While we there we saw Jesse from Los Angeles Inspiration, and he informed us that Skateboarder and "Fantasy Factory" star Rob Dyrdek was signing at the Chevy booth. We all headed over there and got that auto as well. 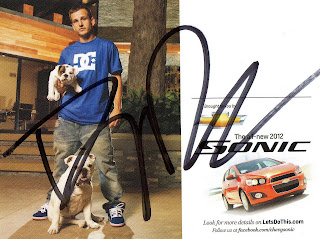 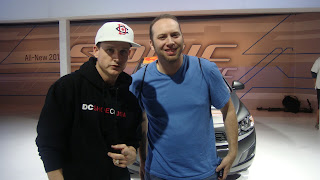 Overall I'd say I had a great day. I got one HOFers auto, one NBA superstar's auto and a third auto from a pretty famous skateboarder. Not bad if you ask me.
Share |
Posted by Dodgerbobble at 5:47 PM