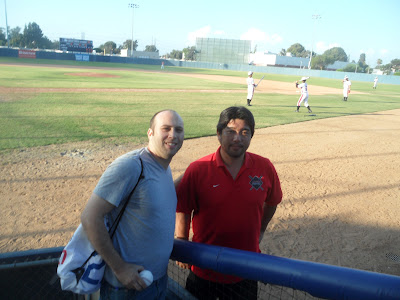 After a two week hiatus, I've decided to get back to the blog. I have to admit, the break has been nice. I probably would have taken more time off had it not been for the Fernando Valenzuela bobblehead giveaway on Tuesday, which I'll get into later this week, and the encounter with one of my idols, former Dodger Hideo Nomo, on Wednesday.

The 90's weren't the best years for Dodger fans, but we did get to see some great players. Hideo Nomo was one of those players. I tell my kids about him all the time. In my opinion, Nomo is the greatest Japanese pitcher ever, so when I got a tip from Facebook friend Juan that Nomo would be in Compton, I got real excited.

So what exactly was a legend like Nomo doing in Compton, California? Managing a Japanese 15-U baseball team. Nomo's team played against an American MLB Urban Youth Academy team that was managed by former Angels pitcher Shigetoshi Hasegawa. There were two games being played that day, one at 3:00, which I couldn't attend because of work, and another at 7:30.

I drove down to Compton with my good friend Mike from Nomo's Sushi Platter. He's the biggest Nomo fan I know and I'm sure he was more excited than I was. When we arrived, we ran into only one other person we knew and we were very surprised by that.We expected other autograph seekers to be there, but it was mostly parents of the kids in the stands. After taking a walk around the stadium, we spotted Nomo in one of the dugouts and decided to sit nearby. Let me tell you, we were all very nervous, but when Mike saw him in there he went for it! He asked him for an autograph. Hideo told us one minute, and he was true to his word. He called  us over and signed for us. He even took pictures! 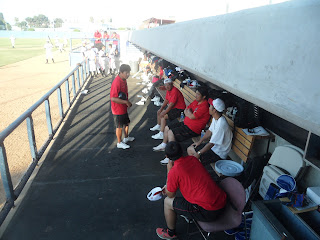 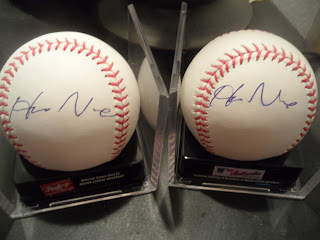 After getting the autograph, we could have left, but we decided to stay for the game. It was a pretty good game too. Both teams look like they have some future professionals. After the game, there was a nice closing ceremony in which all the players got medals. Hideo and Hasegawa even signed some more, which I took advantage of because I didn't know if I would ever get the opportunity again.

This was one of the greatest days I've had as a Dodger fan and as an autograph collector. Thanks to Juan for the information. I had a great time! I also want to give a shoutout to my friends David from David's Autograph Signings and Benson. Glad you guys got the auto!
Share |
Posted by Dodgerbobble at 9:57 PM