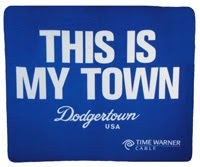 I was taking a look at the Dodgers promotional schedule. They've got some nice giveaways this year. We've got all the usual goodies here, blankets, towels, posters, fireworks nights and of course bobbleheads. The first Dodger Bobblehead night of the season, presented by Bank of America, will feature Andre Ethier on May 18. On June 8, the giveaway is the Jonathan Broxton Bobblehead presented by Kaiser Permanente. The James Loney Bobblehead will be the giveaway on July 20 and the final Bobblehead night of the season, presented by San Manuel Indian Bingo & Casino, will be on August 17 and feature Matt Kemp. All Bobbleheads are available to the first 50,000 fans in attendance.