Bobblehead of the Day: Joe Beimel

Today we're gonna take a look at Joe Beimel's 2008 Dodger bobblehead. On Tuesday, August 12, 2008, the Dodgers gave away Joe Beimel bobbleheads to the first 50,000 fans in attendance. Presented by Bank of America, this bobblehead was made by P Squared Promotions. This was the fourth of four bobbleheads given away in 2008.The other three were Joe Torre, Takashi Saito, and Brad Penny This was a special bobblehead because the fans voted on this one. For the second consecutive season, the Dodgers conducted an online fan vote during Spring Training to determine who would get the bobblehead, and after Russell Martin garnered the most votes in 2007, Beimel took home the honors in 2008. With a strong Internet following, including a campaign that was orchestrated by his parents, Ron and Marge Beimel, the southpaw reliever earned the right to be immortalized in ceramic.


The Dodgers played the Philadelphia Phillies that night, and won, 4-3. Clayton Kershaw and Cole Hamels started the game, but neither one of the young studs factored in the decision. Hong-Chi Kuo was the winner and JC Romero took the loss. Joe Beimel did make an appearance in the game, pitching one inning and striking out 1. Andre Ethier also got one of his many walk-off hits in this game, which helped give manager Joe Torre his 2,127th in the regular season, breaking a tie with Joe McCarthy for seventh place on the career list. It was a memorable game.


Before the Dodgers actually gave away the bobblehead, there were two running jokes regarding this nodder. The first was whether the bobblehead would have barbie-doll-like hair or not, because Joe had famous flowing locks. The answer turned out to be no. The second joke was, would the bobblehead's left hand have a bloody gash? The answer to this was also no. This was in reference to Joe's stupid decision to go drinking at a New York City bar before the 2006 playoff meeting with the Mets. He ended up breaking a glass, cutting himself and then needed stitches on his pitching hand. Joe originally told the Dodgers he cut himself in his hotel room. It was a huge blow to the Dodgers at the time, as Beimel was the teams left handed specialist out of the bullpen. The Dodgers ended up using Mark Hendrickson to face lefties. Beimel went sober for 15 months following the incident.
OK, let's take a look at Mr. Beimel: 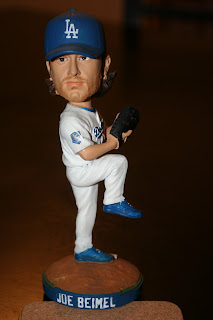 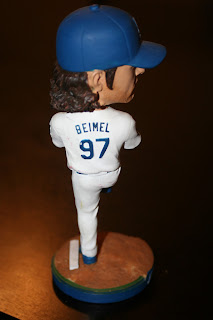 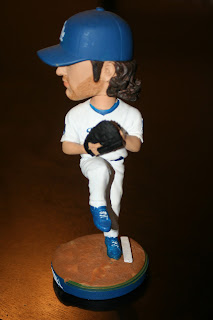 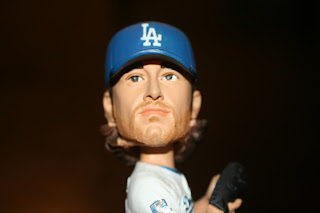 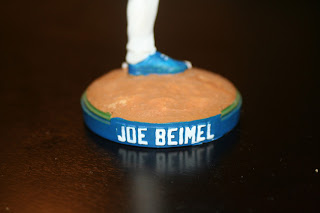 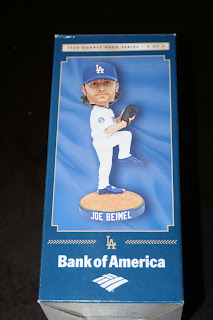 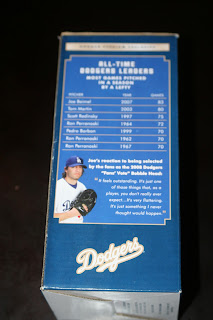 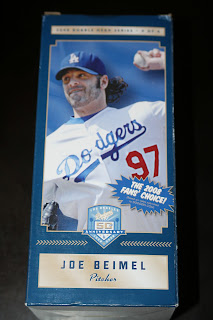 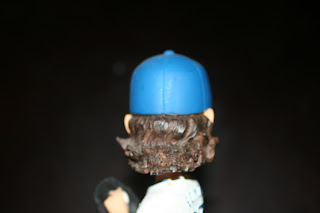