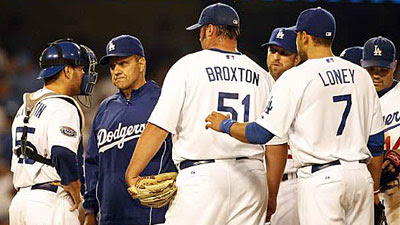 It was real exciting to watch Clayton Kershaw pitch a gem tonight. A win would have been a great way to end this series with the New York Yankees and interleague play. Unfortunately, Joe Torre was involved in this game. With a four-run lead going into the ninth inning, The "Hall of Fame" manager decided to bring in Jonathan Broxton. This after Broxton had pitched in two of the last three games. WTF?

Now, I know Broxton is going to take a lot of heat for tonight's loss, but this has to fall on Torre. He's got a record of bullpen abuse, and now he's making Jonathan Broxton his next victim.

We saw how much Torre used Ramon Troncoso earlier this year, now he's a mess. He continues to use George Sherrill, even though Sherrill couldn't get my grandmother out. Hong Chi Kuo will probably require another surgery soon. Cory Wade is just starting to make a comeback from shoulder surgery. The list goes on and on.

It's tough watching Torre manage(if you want to call it managing) a bullpen. I don't think he understands what he's doing to the reliever's arms. The madness needs to end. Clayton Kershaw and the Dodgers should have won tonight's game. Thanks to Joe Torre, that didn't happen.
Share |
Posted by Dodgerbobble at 11:17 PM