Thank You Boys In Blue 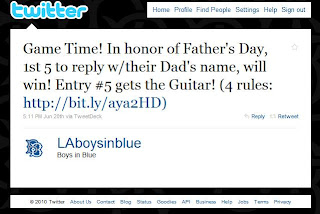 I just wanted to thank  Boys In Blue and Josh Lukin of the Dodgers for the nice gift they sent me today. On Sunday, for Father's Day, @LAboysinblue held a twitter contest.  The first five people to tweet their father's name won. The first four winners won a CD pack, the fifth to reply won an autographed George Strait Guitar. I was the fourth to reply. I missed the guitar by that much. 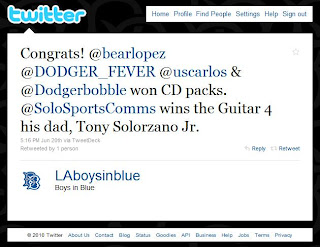 I got the four pack of country CD's in the mail today. Thank you Dodgers and Boys In Blue.
Share |
Posted by Dodgerbobble at 11:24 PM