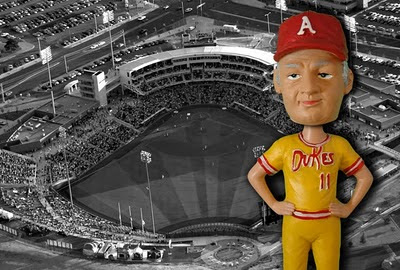 Evan, over at New Mexico Fan, the number one source for all things Albuquerque Isotopes, gives us the first look at the Tommy Lasorda bobblehead giveaway. Presented by Raylee Homes this bobblehead will be given away to the first 3,000 fans on Saturday, July 17.

Mark Saturday July 17, on your calenders. That's when the Tommy Lasorda bobblehead will be given away at Isotopes Park.

It Is also Dukes retro night so dig up your Duke jersey and cap and head out to Isotopes park.

The bobblehead has Tommy dressed in an old Albuquerque Dukes uniform. Skinny Tommy in a yellow uniform with red cap is something different. I love it.

Thank you Evan for the pictures. Check out New Mexico Fan here.
Share |
Posted by Dodgerbobble at 10:09 PM