A Sweep in San Francisco And Other Dodger News 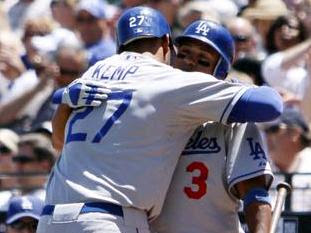 The Dodgers leave San Francisco today with a series sweep over the Giants. How nice does that sound? Three days ago Dodger fans were up in arms over Joe Torre's bullpen debacle. What a difference three days in San Fran makes.

Matt Kemp started today after staying out of the starting line-up three consecutive games. He was huge in today's 8-2 victory, going 3 for 4 with a walk, homerun and three RBI. I hope this is the game that gets Matt Kemp going. Kemp and manager Joe Torre had a meeting on Tuesday. And even though the details of the meeting haven't come out, I hope the tension between the two has been cleared.

Rafael Furcal had another big game going 3 for 4 with a homerun and 2 runs batted in. He also scored three times. Since his father passed away, Rafa has gone16 for 34 with 11 runs and seven RBI. His father passing away is very sad, but it seems to have motivated the Dodger shortstop.

Vicente Padilla hit a milestone with his win today. It was win number 100 for the righty from Nicaragua. Vicente looked good, going seven innings, allowing one run on three hits, walking one and striking out five. His only blemish was a solo homerun given up to Aaron Rowand.

I have to say, I'm happy inter-league play is over. It's nice to get back to National League play. The team is off to Arizona to take on the Diamondbacks. They get to face former Dodger Edwin Jackson who pitched a no-hitter just last Friday. Let's hope the roof is closed and the air conditioner is on in Phoenix. Today's high was 109 degrees.

In other Dodger news:

Manny Ramirez is scheduled to have an MRI on his injured right hamstring during Thursday’s day off in Phoenix.

After being designated for assignment on Friday, Charlie Haeger cleared waivers, and was outrighted to AAA Albuquerque.