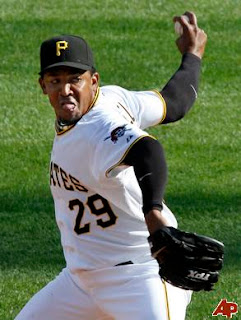 The Dodgers made another trade today, acquiring pitcher Octavio Dotel from the Pittsburgh Pirates for pitcher James McDonald and outfield prospect James Lambo. Dotel,36, has a 4.28 ERA in 41 appearances with 21 saves for the Pirates this season.

Dotel was in his first season with the Pirates after signing a one-year, $3.5 million free-agent deal last winter that pays him a base salary this season of $3.25 million and carries a $4.5 million club option for next season with a $250,000 buyout. The Pirates also sent the Dodgers $500,000 in cash to cover most of the remainder of Dotel's contract.

There was a clause in Dotel's deal that automatically converted the club option to a mutual option in the event of a trade, meaning Dotel could simply opt for free agency in the fall even if the Dodgers want to exercise the option.

McDonald, 25, had long been considered one of the Dodgers' top pitching prospects but hadn't been able to gain a foothold in the major leagues despite being on the postseason roster each of the past two years. He had made one start this season after being called up from Triple-A Albuquerque on July 19, giving up four runs in five innings that night in a loss to the San Francisco Giants. After that lone start, McDonald was moved to the bullpen, where he had a 10.11 ERA in three appearances.

Lambo, who will turn 22 next week, has long been considered one of the Dodgers' top outfield prospects. But he fell out of favor somewhat when he was suspended for 50 games earlier this season under baseball's Minor League Drug Prevention and Treatment Program after testing positive for a drug of abuse, which multiple sources have identified as marijuana.

Lambo was hitting .271 with four homers and 25 RBIs in 47 games for Double-A Chattanooga.

I think the Dodgers gave up too much for a 36 year old reliever. Yes, JMac is having a bad year. Yes, Lambo was suspended earlier in the season for drug violation, but that was for marijuana. And yes, Dotel will help the ailing Dodger bullpen. But both McDoanld and Lambo have been considered top Dodger prospects over the last couple of years. I think Ned could have gotten much more for these two.

With all the young talent the Dodgers have traded away this week, they could have done a lot better than Podsednik, Lilly, Theriot and Dotel. As usual Ned overpayed for veteran players. The Dodger farm system has been depleted and it doesn't look like the team has gotten much better.
Share |
Posted by Dodgerbobble at 3:36 PM