Here's a couple of bobblehead notes on this Sunday morning:

Just in case anyone missed it, here's another update on the All New Coke Value Pack promotion the Dodgers are running. After posting this promtion last Sunday, I got a few emails asking which bobbleheads would be given away, and how it would work.


So I sent an email to the Dodgers ticket office asking if it was any of the bobbleheads that were given out this year. They responded, no, but it will most-likely be Jonathan Broxton or Manny.

So if you missed out on Brox or Manny(not sure which Manny they are talking about), you may want to pick up this ticket pack.
Here's the promotion again:
On select Wednesday's, Thursday's and Sunday's in August, you can purchase a New Coke Value Pack, which includes 4 Tickets, 4 Dodger Dogs, 4 Cokes and 4 Bobbleheads. This deal starts August 4th, you'll receive a current Dodger Bobblehead with every ticket. Here are the dates:

You can purchase the All-New Coke Value Pack here. 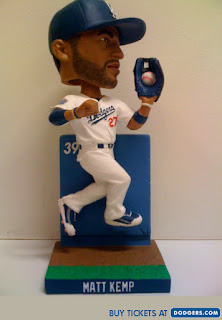 Roberto at Vin Scully Is My Homeboy gives us a detailed view of the Matt Kemp bobblehead that will be given away on August 17, when the Dodgers play the Rockies. You can see the bobblehead here.

Any Deadheads out there? Ernest at Blue Heaven  shows us a Jerry Garcia bobblehead that will be given away by the San Francisco Giants on August 9, when they pay tribute to the music legend. Fans who purchase a special event ticket will receive a seat in the Jerry Garcia designated section at AT&T Park; a limited edition Jerry Garcia/Giants themed bobblehead, portraying Garcia’s National Anthem performance at Candlestick Park back on April 12, 1993.

This is a really cool idea. Too bad it's a Giants bobblehead. 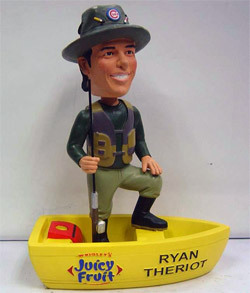 Newest Dodger, Ryan Theriot, had a bobblehead night on June 17 when the Cubs played the Oakland A's. Theriot's bobblehead doll was not your usual baseball look-alike. His doll is standing in a yellow boat with a fishing pole and floppy hat. Huh? When asked if he designed it or the sponsor, Juicy Fruit, he said, "A little bit of both. I wanted to do something a little off the cuff, kind of cool and interesting. That's what we came up with and it came out great."        Ok?
I've seen a few on eBay. I might place a bid on one.
Share |
Posted by Dodgerbobble at 8:39 AM