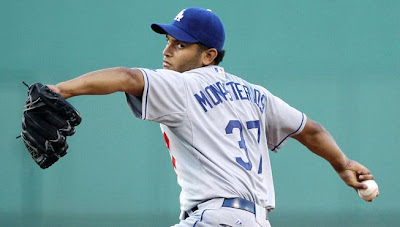 Carlos Monasterios will start once again. Monk is replacing James McDonald, who replaced John Ely who replaced Charlie Haeger. He's 3-2 with a 3.60 ERA.

Could we see Kenley Jansen today?  Tony Jackson at ESPNLosAngeles.com shows us how far Jansen's come in his journey to the majors.

Brad Ausmus to start today's game. Some milestones for the Dodger's backup catcher. Today he will surpass Al Lopez for seventh-place all-time on the games caught list in Major League history (1919). Today's game also is Ausmus' 1952nd of his career, and he will pass Shawn Green for the all-time Jewish record for games played.

Jamey Carroll says he can pitch, if needed. The versatile utility man  has  played 12 games at second base, seven at third, 33 at shortstop and three in left field. He's willing to take the mound for the Dodgers if it'll help.

"I'm all for saving the bullpen. I'd throw fastballs, right down the middle because at that point in time, it wouldn't matter."

He's probably a better choice than some of the current relievers.
Share |
Posted by Dodgerbobble at 1:01 PM