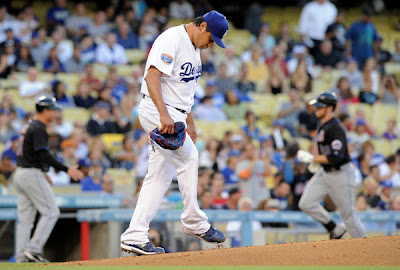 Vicente Padilla pitched another great game. He went 7 innings tonight, giving up two runs(one earned). He struck out 6 Mets and walked none. He was removed in the seventh inning for a pinch hitter. That's six games in a row now that Padilla has gone at least six innings and given up 2 runs or less. His ERA is 1.56 in that span. Padilla was the loser in tonight's game, with the Mets winning 6-1.

Johan Santana was his usual self, going seven innings,  allowing one run and five hits, while striking out four and walking one.

Once again, the Dodger bullpen was bad. It was announced earlier that Jonathan Broxton went home with stomach ailment and Hong-Chih Kuo would be unavailable out of the bullpen from pitching Tuesday and Thursday night. So it was up to the rest of the bullpen to keep the Dodgers in the game. That didn't happen. Jeff Weaver walked two and James McDonald allowed a sacrifice fly and an intentional walk. Jack Taschner, who was just called up, walked one. With the bases loaded, Joe Torre brought in Travis Schlichting who gave up a bases clearing double.

The Dodgers released Justin Miller today and recalled  Kenley Jansen from AA Chattanooga. Also, Ned Colletti says the Dodgers are serious buyers with the trade deadline nearing. He has a few pitchers on his radar, including Scott Downs, Jason Frasor, Dan Haren, Ted Lilly, Paul Maholm, and Roy Oswalt. I have no faith in Ned, but if a move is made, I'm sure he'll  get taken to the cleaners by the other team.
Share |
Posted by Dodgerbobble at 11:37 PM