Happy Fourth of July everyone. Just a couple of things to mention on this Independence Day. 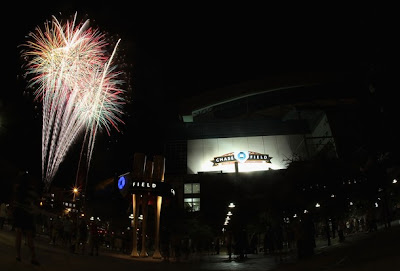 Fireworks inside and outside of Chase Field. Matt Kemp, Andre Ethier and Rafael Furcal all hit homeruns for the Dodgers last night in a 14-1 victory over Arizona. Clayton Kershaw went 5.2 scoreless innings and the DBacks committed SIX errors. What a crazy game. After the game, the fans in Phoenix were treated to a fireworks show.
Fireworks at Dodger Stadium. To celebrate the Fourth of July, the Dodgers will incorporate several military elements into Monday night's pregame ceremonies, including a flyover by a USAF 144th Fighter Wing out of Fresno, the USMC presenting the colors and members of the 2nd Battalion, 23rd Marines from Pasadena lining the bases with both teams during the National Anthem. After the game, fans can enjoy Independence Day Fireworks presented by Hyundai from the field at Dodger Stadium.

2010 All Star Selection Show. The 2010 rosters for the 81st All-Star Game will be unveiled on TBS's selection show, which is airing live now. Will Andre Ethier start in Anaheim? Will any other Dodgers be All- Stars this year?
UPDATE:
Andre Ethier will start. Jonathan Broxton has been selected as one of the pitchers. 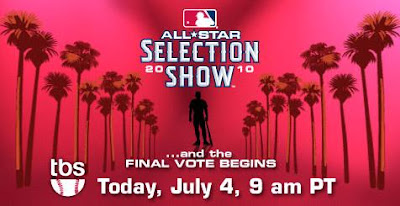