Manny To DL, Tron To AAA And Other Dodger Notes 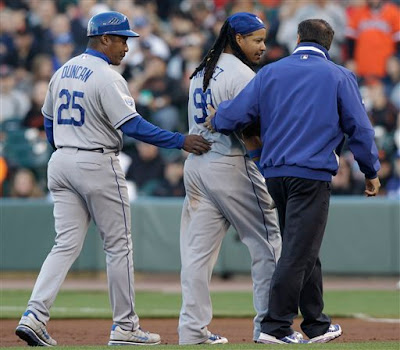 Manny Ramirez  is heading to the disabled list. This was expected. He injured himself sliding back into second base last Tuesday in San Francisco. An MRI  showed inflammation in the lower part of the hamstring.  His hot bat will surely be missed. Xavier Paul has been called up from AAA.

Ramon Troncoso has been sent down to AAA Albuquerque. This move came out of nowhere, but the Dodgers needed to do it. The often used Troncoso needed some rest. He's safe from Joe Torre's abusive ways now. Travis Schlichting has been recalled to replace Tron in the bullpen.


The Dodgers will be back in town on Monday for their final homestand before the All-Star break. They will be taking on the Marlins and Cubs. Here's the official release from Dodgers.com:
The Dodgers play their last homestand before the All-Star Break starting Monday as they take on the Florida Marlins (July 5-7) and Chicago Cubs (July 8-11). Special events next week include Independence Day Fireworks presented by Hyundai following the Monday, July 5 game and an Andre Ethier Action Figure giveaway presented by Claim Jumper Restaurants on Thursday, July 8.


Starting this homestand, the Dodgers are offering a variety of new ticketing options, including new Coca-Cola Value Packs. For both Thursday home games in July, fans can purchase Coca-Cola Value Packs that include four tickets, four Dodger Dogs, four Cokes and four Matt Kemp Action Figures, which will be included in the package in addition to the action figure giveaways scheduled for those nights (Ethier and Ramirez). The Dodgers also recently launched two new Summer 4-Packs that offer savings of up to 50% off of the box office prices and include giveaway nights and special events. For a limited time, groups of 30 or more who purchase tickets on the Field or Loge levels for any game will receive a free Dodger T-shirt with every ticket.
Fans can purchase tickets to any games this homestand at dodgers.com, losdodgers.com, or by calling 866-DODGERS.

Monday, July 5 vs. Florida Marlins - 6:10 p.m.
To celebrate the Fourth of July, the Dodgers will incorporate several military elements into the night's pregame ceremonies, including a flyover by a USAF 144th Fighter Wing out of Fresno, the USMC presenting the colors and members of the 2nd Battalion, 23rd Marines from Pasadena lining the bases with both teams during the National Anthem.

Five hundred veterans of the Iraq and Afghanistan wars from Port Hueneme and Port Mugu will be at Monday's game as part of the Miller High Life "Give a Veteran a Piece of the High Life" program. Veteran Paul Rieckhoff, the Executive Director and Founder of Iraq and Afghanistan Veterans of America, will throw out a ceremonial first pitch, the group of veterans will be honored in center field during pregame ceremonies and Miller High Life delivery man Windell will be in attendance as well.

The Dodgers will recognize newly selected medical professionals for the United States Army Medical Department in a special commissioning ceremony during pregame ceremonies. Fourteen graduate level health care professionals will be sworn in as soldiers on the field.

The Dodgers will honor Alma Martinez as their "All-Star" of the PEOPLE "All-Stars Among Us" campaign during pregame ceremonies. Martinez from Redondo Beach has been chosen by fans across the nation for her community service through Amigos Sin Barreras, an organization that serves low-income, HIV-positive Los Angeles residents with medical care, food and social engagement and helps to prevent the spread of and provide quality services for people suffering from HIV/AIDS. Martinez plus the other 29 "All-Stars Among Us," one representing each MLB Club, will attend and be honored during the pregame ceremony of the 81st Major League Baseball All-Star Game on July 13 on FOX beginning at 5:00 p.m. PT (8:00 p.m. ET).
Chad Billingsley will host a group of 10 children from Mattel Children's Hospital at UCLA at the game as part of his personal community initiative, Chad's Champs. Each child will get a T-shirt and to meet with Billingsley on the field during batting practice and get his autograph.

As part of the second fan club broadcast of the season, three Women In Blue winners, three Boys in Blue winners and three Viva Azul club winners will each call an inning from the Vin Scully press box with KABC 790 Dodger Talk host Ken Levine. Women In Blue winners include Jennifer Amsbaugh from Long Beach, Rosanna Bules from Hesperia and Cathy Shanahan from Tarzana, Boys In Blue members calling an inning are Steven Smith from Orange, Kevin Maldonando from Walnut and JD Miller from Rosamond and Viva Azul club winners include Steven Ayala from Pico Rivera, Mario Olvera from Canyon Country and Jose Duran from Bellflower. On Tuesday, the entire game broadcast will be posted on dodgers.com and fans will be able to listen and vote for their favorite broadcaster. A winner for each club will be chosen at the end of the season and the grand prize winners will receive Dodger tickets and a guest appearance on Dodger Talk on KABC. Fans can register to be broadcasters and vote for their favorites at www.dodgers.com/broadcaster.
The July edition of Dodgers Magazine debuts on Monday and features Manny Ramirez on the cover posing with the rare Porsche that he has donated to ThinkCure! and the Maryvale home for youth. Fans can purchase Dodgers Magazine inside Dodger Stadium or order subscriptions at www.dodgers.com/magazine or by calling 877-258-3062.

The sixth edition of the Dodgers Playbill features a photo of Jonathan Broxton, Clayton Kershaw and Hong-Chih Kuo in cowboy gear from the Young Guns poster photo shoot on the cover. Inside stories include a behind-the-scenes look at the photo shoot, other features from the Dodgers Media Network, information on ticket specials and other great deals.

Following the game, fans can enjoy Independence Day Fireworks presented by Hyundai from the field.

Tuesday, July 6 vs. Florida Marlins - 7:10 p.m.
20 pre-selected kids from the Optimist Youth Home will be treated to a shopping trip at Sports Authority in Burbank from approximately 11:30 a.m. - 1:00 p.m. with Reed Johnson, Ramon Troncoso, A.J. Ellis and George Sherrill before the game.

James Loney will host a group of seven children from Reviving Baseball in Inner Cities - Los Angeles at the game as part of his community program, Loney's Lounge. Each child will get to watch the game from the Baseline Box Club and meet with Loney on the field during batting practice and get his autograph.
Olympic gold medalist ice skater Evan Lysacek, who was also on the most recent season of "Dancing With the Stars" will throw out a ceremonial first pitch.

Wednesday, July 7 vs. Florida Marlins - 7:10 p.m.
Fernando Valenzuela will host a group of 40 students from the California State Universities Educational Talent Search Program as part of the community initiative Amigos de Fernando. The children will all get program T-shirts and will meet with Valenzuela on the field during batting practice and get his autograph. The Educational Talent Search Program assists students with completing high school and attending the college of their choice.

Lake Balboa Birmingham High School female baseball player Marti Sementelli will throw out a ceremonial first pitch before the game. Sementelli is a 17-year-old pitcher and has led Birmingham High to the City Section playoffs and also won a bronze medal playing for Team USA in the 2008 Women's Baseball World Cup in Japan, where she was named the best pitcher in the tournament.

Jake Pavelka from "Dancing With the Stars" season 10 and "The Bachelor" season 14 will throw out a ceremonial first pitch.

Thursday, July 8 vs. Chicago Cubs - 7:10 p.m.
At 2:00 p.m. in the Dugout Club, the Dodgers will announce a new partnership with global computer manufacturer MSI. MSI will introduce a Dodgers limited-edition Wind Top (AIO) All-in One PC and Netbook, on sale at La Curacao stores in July.

Fans who purchase tickets in Dodgertown, Bikini Bottom will receive Sponge Bob T-shirts and an all-you-can-eat menu including mud pies, pineapple under the sea and bubble burgers. To purchase tickets in Dodgertown, Bikini Bottom visit www.dodgers.com/mytown. Sponge Bob will also throw out a ceremonial first pitch and meet with fans in Autograph Alley before the game.
Friday, July 9 vs. Chicago Cubs - 7:10 p.m.

The first 20,000 fans will receive Dodger Young Guns Posters presented by MSI Computers.
Fans who sit in Dodgertown, Kings on Friday will receive L.A. Kings T-shirts and an all-you-can-eat menu including pastrami sandwiches, kettle-style potato chips and kosher-style pickles. Kings mascot Bailey and Kings alumni will be on hand to sign autographs for fans in the section and Kings Captain Dustin Brown will throw out a ceremonial first pitch.

California Lottery will honor California Education with a pregame presentation that acknowledges several California Teachers of the Year. California State Superintendent of Public Instruction Jack O'Connell and Director of the California Lottery, Joan Borucki, will throw out a ceremonial first pitch and join a group of approximately 25 teachers and their families to watch the evening's game.

Saturday, July 10 vs. Chicago Cubs - 1:10 p.m.
Saturday's game will be televised nationally on FOX.
Saturday is also On Field Photo Day presented by Staples and fans can take pictures of Dodger players on the field before the game. Fans will be able to access the field starting at 11:10 a.m.
Winners of the 31st Congressional Student Art Competition will be honored on the field before the game. Each year members of the United States House of Representatives recognize artists nationwide and winners will have their artwork displayed in the U.S. Capitol Building.
Actor David Duchovny of "Californication" will throw out a ceremonial first pitch and pop singer and "American Idol" alumnus Jordin Sparks will sing the National Anthem.
Captain Morgan will also throw out a ceremonial first pitch as part of his Major League ballpark tour.
Sunday, July 11 vs. Chicago Cubs - 5:05 p.m.
Sunday's game will be televised nationally on ESPN.
Sunday is a Viva Los Dodgers Sunday, presented by State Farm. Starting two hours prior to the game fans can enjoy live music and a family-friendly celebration in Lot 6 and this Sunday fans can enjoy live musical performances by Debi Nova.

Team USA forward Landon Donovan, who recently returned from representing the United States at the World Cup in South Africa, will throw out the ceremonial first pitch. Actress and singer Demi Lovato of the Disney Channel's "Sonny With a Chance" will sing the National Anthem.