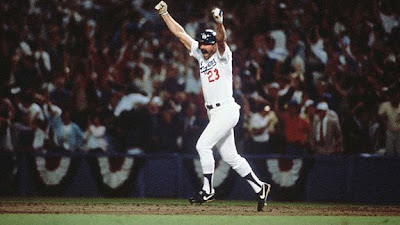 The Dodgers are in Phoenix today to take on the D-Backs, a team that cleaned house yesterday, firing general manager Josh Byrnes and manager AJ Hinch. I understand the Hinch firing, before Arizona, he had no managerial experience at any level. The Diamondbacks have talent, so his this team should have done more under him. But Byrnes? He still had 5 1/2 years left on his contract. Ownership should have at least let Byrnes operate with a new manager.

Well, they do have a new manager today, former Dodger and 1988 World Series hero Kirk Gibson. I hate to see him in Sedona Red, but he is one of my heroes, so I wish him all the best. Just not this weekend.

This may get played a million times, but I can never get enough. Here's Gibby's famous World Series Game 1 ninth inning at bat against Dennins Eckersley.