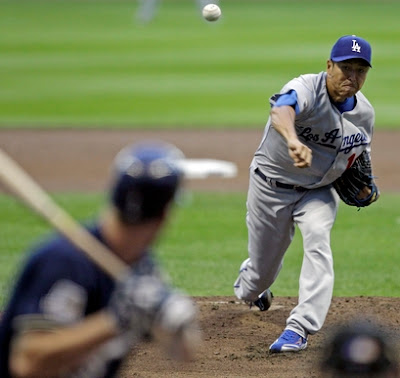 The Dodger offense came alive for the second game in a row, as the boys in blue beat the Milwaukee Brewers Wednesday night.  The Dodgers were led by Manny Ramirez, who went 2 for 2 with two walks, two doubles, one run scored and one RBI. That RBI gave the Dodgers a 5-4 lead, and they didn't give it back, going on to win by the same score. It was reported earlier in the day that Manny had been placed on waivers by the Dodgers.

Hiroki Kuroda, who was also reported as being placed on waivers, had a nice night on the mound. Hiro went seven innings, giving up four runs on seven hits while striking out six. He did not walk any Brewers.

Andre Ethier got the Dodger offense started, hitting a solo homerun in the third inning, his 2oth on the year.

Jonathan Broxton shut down the Brewers in the eighth inning. Joe Torre then used Ronald Belisario, George Sherrill and Octavio Dotel for one batter each in the ninth inning, with Dotel earning his 22nd save on the year.

Manny Ramirez and Hiroki Kuroda weren't the only Dodgers placed on waivers. It's being reported that Casey Blake, Scott Podsednik and Jay Gibbons were also placed on waivers as well.
Share |
Posted by Dodgerbobble at 10:18 PM