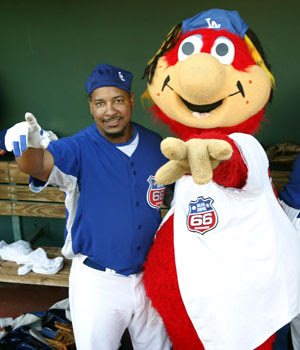 Manny starts rehab assignment, Furcal suffers setback. Manny Ramirez, sidelined since July 17 because of a right calf strain, went 1 for 2 tonight with a single and a walk as the Designated Hitter for the Single-A Inland Empire 66er's. The Dodgers expect Ramirez to play for the 66er's again Thursday and Friday before being reevaluated.

It's thought that Manny will be placed on waivers once he's off the DL. The waiver rules states that every NL team has first dibs, and if none want him, then every AL team gets a crack. If no one claims Ramirez, the Dodgers may then trade him to any team. If one team or multiple teams claim him, then the team with the worst record at the time of claiming (with every NL team having priority over every AL team) is the only one that can get Ramirez. The Dodgers have the option of letting him go to the claiming team for nothing except the obligation of paying his salary or pulling him off waivers and working out a trade, but only with that one team.

Rafael Furcal, who was scheduled to begin a rehab assignment this week, complained of back soreness, which had worsened Wednesday. Furcal, who has been out the past 15 games because of a low back strain, will stop baseball activities and have a bone scan on Thursday.

Will Manny play next season? His agent, Scott Boras, says Manny wants to play. I wonder where he'll sign.

Dave Roberts expects full recovery from cancer. Former Dodger Dave Roberts, who was diagnosed with Hodgkin's lymphoma in March, is expected to make a full recovery. Roberts, who didn't go public with his diagnosis until May 3, completed eight rounds of chemotherapy, and he is undergoing three weeks of radiation treatments at Brigham and Women's Hospital in Boston. Get well Dave.

Dodger god Steve Garvey made a cheesy commercial with Tillman the Skateboarding Dog promoting Bark in The Park Night at Dodger Stadium on August 21. The James Loney bobblehead even makes an appearance. Check it out here.
Share |
Posted by Dodgerbobble at 11:06 PM