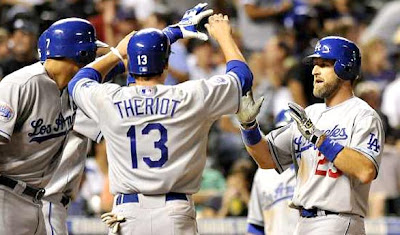 Dodgers win four in a row. Clayton Kershaw pitched another gem. He outdueled Cy Young candidate Ubaldo Jimenez, going 6 innings, while giving up one run on 5 hits and two walks and striking out six. His only blemish was a second inning homerun he gave up to Todd Helton. Kershaw finally had his first 1-2-3 first inning of the year.

The Dodgers offense keeps rolling as they scored six runs tonight. That's four games in a row now that the Dodgers have scored five or more runs. The offensive hero tonight was the Beard, Casey Blake, who hit his fifth career grand slam tonight off of Colorado reliever Matt Belisle. That gave the Dodgers a 5-1 lead, and they wouldn't look back. Matt Kemp knocked in one more run in the ninth inning as the Dodgers went on to win 6-2.

In other Dodgers news:

The Chicago White Sox file a waiver claim on Manny Ramirez.
Ted Lilly is the latest Dodgers player to be placed on waivers.
Frank McCourt gives 40,000 Dodgers tickets to LAPD officers.
The Dodgers will celebrate team photographer Jon Soo Hoo for 25 years of service.
Joe Torre's wearing an "In Beard We Trust" shirt from theLFP.com. You can order a shirt here. 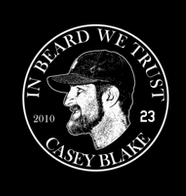