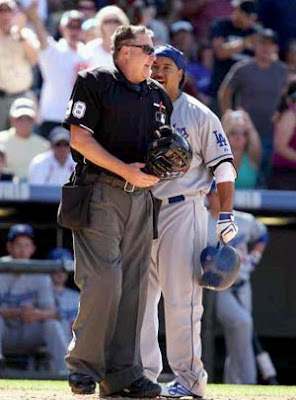 According to Tony Jackson at ESPNLosAngeles.com, Manny will be headed to the White Sox Monday. Because the White Sox will be getting Ramirez on a waiver claim, they will be on the hook for the remainder of Ramirez's $ 4.3 million salary.

Manny didn't start the last four games, so we all knew this was coming. Manny's last appearance in Dodger blue was him pinch-hitting in the sixth inning of Sunday's 10-5 loss to the Rockies. After seeing one pitch, which was called a strike, Manny argued the call, and was ejected from the game. There's been a lot of talk that he did it on purpose because he knew he was on his way out. Just Manny being Manny.

Word on the deal is trickling in. Sports Illustrated writer, Jon Heyman, tweets;

I think Frank McCourt would love to get some salary relief. But some talent in return would be nice.

I'd like to say it was great having Manny in LA for the last two seasons. Mannywood was something I'll never forget. I was at the BobbleSlam game. It's a game I can tell my grandchildren about. You can read about the game and the bobblehead here.

I'll be posting updates on this throughout the night.
Share |
Posted by Dodgerbobble at 5:55 PM