Last night I went to my first minor league baseball game. My buddy Tom and I took a trip down to Lancaster to see the JetHawks, single-A affiliate of the Houston Astros, play the Inland Empire 66er's. It was Tom's first minor league game too.

In years past, I've driven down Highway 14 to get to Las Vegas, and I've seen Clear Channel Stadium, where the JetHawks play, on the side of the freeway. I always wanted to see a game there.

Clear Channel Stadium, also known as the "Hangar" is over 50 miles from my home, so the situation had to be right to get me down there. The JetHawks either had to be giving away a bobblehead or they had to be playing the 66er's, who are the Dodgers single-A affiliate. Well last night I got both. 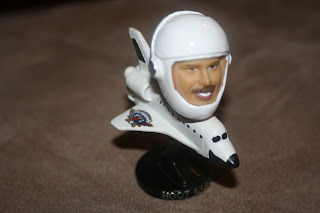 The bobblehead is interesting. It's not of a player but an astronaut. This weekend is Aerospace weekend at the Hangar, so they honored  fromer astronaut Robert "Hoot" Gibson with a bobblehead. It depicts Hoot's head bobbling above a space shuttle. The shuttle's wings have JetHawks logos on them.  I was little disappointed that it's a mini bobblehead, but it was made by Alexander Global Promotions, so the quality is good. Tickets were handed out randomly at the gate to get Hoot's autograph. Tom was one of the lucky few who got the autograph.
It was nice to see the 66er's play too. As a Dodger fan, I hear about the players in the farm system all the time. I finally got a chance to see some of them play. We sat right behind home plate and had a nice view of the game. We were also sitting amongst six or seven scouts. They all had radar guns and were taking notes on the players. Jon Michael Redding was the starting pitcher for the 66er's. I asked one of the scouts next to me how hard he was throwing, and he said between 89 and 93 mph, topping out once at 95. I was impressed with Redding's stuff through the first three innings. He had great command of his fastball and his slider had a nice bite. After getting through the JetHawk line-up once with success, Redding hit the wall in the fourth inning. That was a bit disappointing. Leading 5-1 after three innings, the 66er's gave up 11 unanswered runs to the JetHawks, who won 12-5. 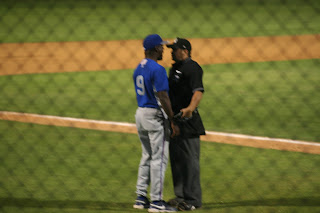 We did get an interesting moment in fifth inning when 66er's manager Jeff Carter got tossed from the game. We could hear him talking crap to the ump from the dugout. He got a warning to keep his mouth shut, but didn't listen. The ump ejected him, and Carter got all up in his grill. The two were in each other's faces for a few moments, then Carter took the walk of shame back to the locker room.
The JetHawks did get the fans involved in different activities between innings. After the second inning, they were shooting shirts into the crowd with a canon, and I grabbed one of those.


Overall, I'd say I had a good time in Lancaster. I got a bobblehead and a JetHawks T-shirt and I got to see some future Dodgers play. I'm glad I experienced it. 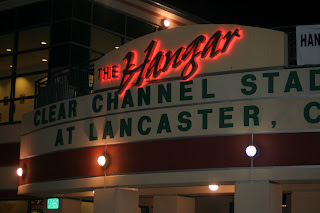