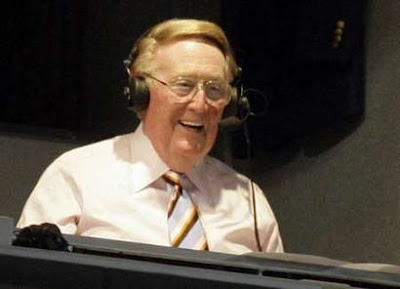 Dodger fans are waking up to some great news this Sunday morning. Vin Scully will be returning to the broadcast booth in 2011 for his 62nd season. It's the same deal as 2010, He'll call all Dodger home games and those road games against National League West Division opponents.


"I'm just honored and humbled to continue my association with the Dodgers, which has been a major part of my life,"

And we're honored to have you calling Dodger games Mr. Scully. You've gotten us through a horrible 2010 season. I hope you decide to come back in 2012 as well.
Share |
Posted by Dodgerbobble at 9:50 AM