Bobblehead of the Day: Paul LoDuca

Today we're gonna take a look at Paul LoDuca's Dodger Stadium bobblehead. Popular amongst Dodger fans, including myself, LoDuca came to Los Angeles in June of 1998, after spending eight years in the minors. He was known as a contact hitter, and his best season came in 2001, when he hit .320 with 25 homeruns and 90 RBI.  In 2003, he had a 25-game hitting streak, which is the second longest in Dodgers history. He was also named to four All-Star teams. Check out LoDuca's Wiki here.

At the 2004 trade deadline, LoDuca, along with Guillermo Mota and Juan Encarnación, was traded from the Dodgers to the Florida Marlins for Brad Penny, Hee-Seop Choi and pitching prospect Bill Murphy. There were a lot of unhappy Dodger fans after the trade was made.

LoDuca's on-field accomplishments are considered a result of PEDs. In 2007, he was connected to Human Growth Hormones in the Mitchell Report. The Mitchell report also claims that Lo Duca introduced several other Dodgers to HGH, including Eric Gagne. I was saddened to hear this, but I know it was a big part of baseball at the time.

On Friday, May 31, 2002, the Dodgers gave away Paul LoDuca bobbleheads to all fans in attendance. Presented by US Bank, this bobble was made by BD&A. It was the first of three bobbleheads given away in 2002. The other two were Shawn Green(7/18) and Hideo Nomo(8/24).

The Dodgers played the Arizona Diamondbacks that night, and lost 6-3.  Omar Daal started for the Dodgers, Randy Johnson for Arizona, with Johnson taking the win. LoDuca went o for 4 on his bobblehead night. 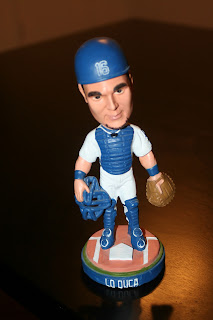 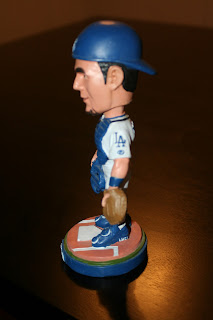 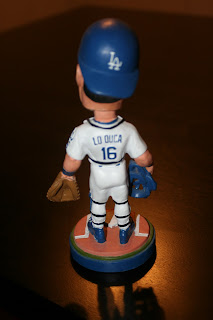 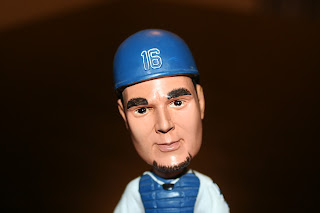 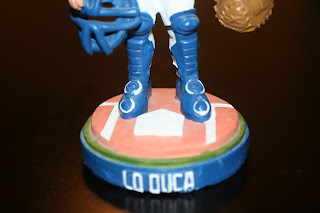 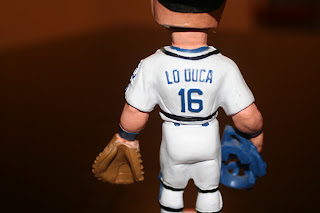 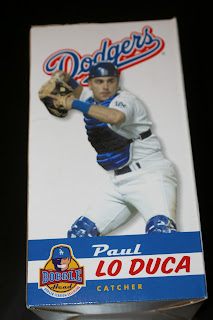 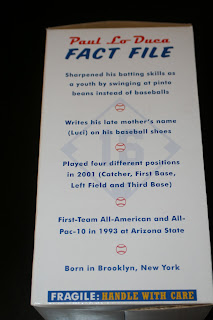 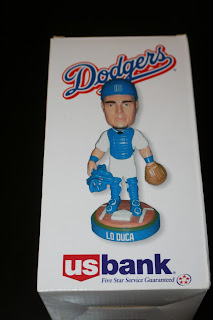 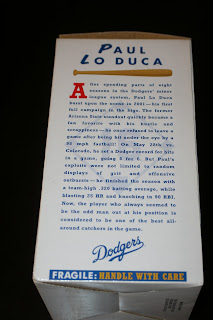 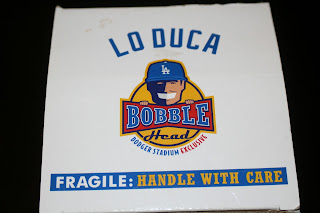 This is a pretty basic bobblehead. It looks a bit like LoDuca. What I do like is him holding his catchers mask. It's not as cool as the LoDuca bobblehead the Mets gave away in 2007. His mask was removable.
Share |
Posted by Dodgerbobble at 10:38 PM