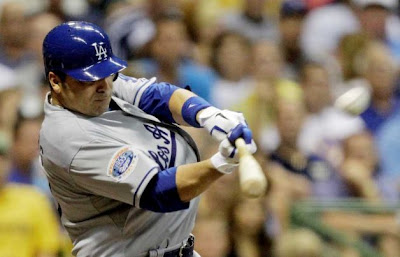 The Dodgers beat the Milwaukee Brewers 5-3 tonight. This is what happens when the Dodger offense actually gives the starting pitcher some run support. They got that run support from a guy making his Dodger debut, Rod Barajas.What a night for the newest Dodger. He went 3 for 4 with a homerun, two doubles and three RBI.

Ted Lilly continues his hot Dodger start. He went 6 1/3 innings tonight, giving up three runs on seven hits while striking out two Brewers. Lilly improves to 5-0 with an era of 1.84 as a member of the Dodgers. 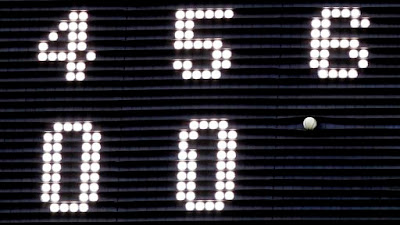 Then there's Matt Kemp. The Bison crushed a 447-foot homerun tonight off of Milwaukee starter Dave Bush. The ball actually got lodged in the scoreboard! It was Kemp's 22nd homerun on the year and his third straight game hitting one out.

Hong Chih-Kuo earned his fifth save of the year after pitching a scoreless ninth inning.
Share |
Posted by Dodgerbobble at 9:23 PM